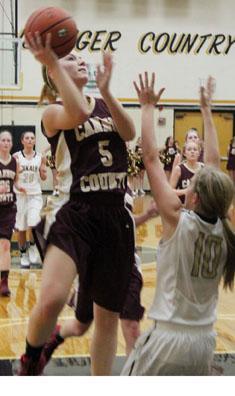 SMITHVILLE - Beating DeKalb has become habit-forming for Cannon County girls basketball teams.
The Lionettes (10-1, 3-1 8-AA) extended their win streak to 35 straight against their rival by nearly reaching the century mark with a 98-68 win Friday (Dec. 13).

Abbey Sissom and Madison Walkup combined for 64 points. Sissom poured in a season-high 36 points and Walkup added a career-high 28. The senior duo combined for 23 field goals. Sissom, who also had six rebounds and four assists, was 12-of-25 and Walkup was a staggering 11-of-15, including 2-of-2 from 3-point range.

Senior Macy Clements also had a big night with 15 points on 6-of-7 shooting. Junior Erin McReynolds had another solid performance with six points, seven rebounds and seven assists.

“Those three were outstanding but it was a total team win,” Lionettes Head Coach Michael Dodgen said. “Erin McReynolds played exceptionally well and we had some strong contributions off of the bench again. We just have to keep working and getting better. We did shoot the ball very well.”

Cannon County needed its firepower for the longest time. It only led 43-36 at halftime and DeKalb was within seven in the third quarter when the outbreak began. The Lady Tigers connected for 12 3-point field goals.

“We didn’t do a good job of getting out on their shooters,” Dodgen said. “We gave them too many open looks and they did what good teams do, they hit them. We have to do a better job defensively, but it’s always good to get a district road win so we will take this one.”

The Lionettes will play at the Rhea County Holiday Tournament beginning Thursday.