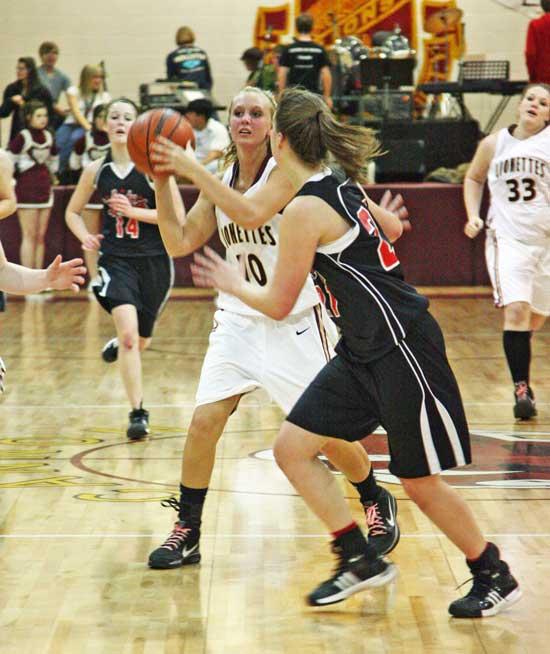 Ashley Campbell looks for a teammate to make a pass to during action against Aaron Academy Friday. (Ronny Burks photo)
Friday night at the Robert A. Harris Gymnasium the Lions and Lionettes welcomed the Royals and Lady Royals from Aaron Academy in Hendersonville for the last home game of the season. This was also a night to recognize the contribution made by the senior Pep-Band members, cheerleaders, manager, and ball players.

The Lionettes opened the game scoring the first 10 points of the game with Taylor King dropping in 6 and Emily Sissom adding 4. Sissom continued her hot hand hitting four 3’s in the quarter and scoring the last 9 points to give Cannon a 22-8 first quarter lead.

Sissom continued to hit from outside with two 3’s in the second, and with help from Chelsey Payne, Lindsey Reed, Erica Melton, and Ashley Campbell, pulled out to a 38-12 lead. Shelby Jordan added another 5 points and a JoAnna Young basket at the buzzer increased the Lionette lead to 45-16 at the half.

In the third, Sissom continued to fire from outside with two 3’s, giving her a total of 8 of 15 for the game. Lauren Ruehlen also added a 3-point basket and scored a total of 9 points in the quarter as the Lionettes saw their lead balloon to 68-18. The defense forced ten turnovers by the Lady Royals and 1 of 5 shooting from the field.

With the starters on the bench in the fourth quarter, Shelby Jordan took over on the inside scoring 7 points as the Lionettes cruised to an 81-24 victory.

Coach Matt Rigsby changed his starting lineup for the night’s game giving all the seniors an opportunity to start their last home game. Andrew Woodin, Ethan Womack, and Terry Koen took the home floor for the last time as a Cannon County Lion.

The Lions opened the second with a Cody Ruehlen 3-point basket and continued to slowly cut into the Royals lead, closing to within two on another Womack 3-point basket at the 4:15 mark. The Royals went ahead by seven with 1:00 remaining in the quarter and held the seven point advantage, 36-29, going into the half.

The Lions stepped up their defensive efforts in the third quarter holding AA to less than 40% shooting from the field. The Lions pulled to within two on a Nave 3-point basket and tied the score on a third Womack 3-point basket at the 5:55 mark. The Royals scored the next 6 points, but the Lions fought back to within three on a Ruehlen basket at the end of the third trailing 47-44.