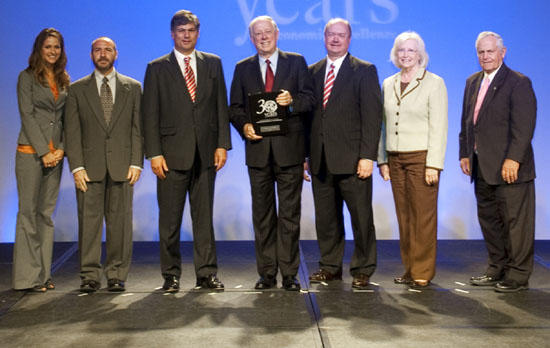 “Solid community development provides the foundation for successful economic development,” said Commissioner Kisber. “Our Three-Star communities play an integral role in the overall economic health of the state, and I congratulate Cannon County for its commitment to excellence and dedication to long-term economic growth and success.”

Cannon County and the towns of Auburntown and Woodbury are now eligible to receive additional incentives under the guidelines of the Tennessee Three-Star program.

“ECD is proud to support Cannon County in its dedication to long-term economic growth and success,” said ECD Assistant Commissioner of Community Development Rick Meredith. “The community has emphasized essential foundational steps and targeted its strengths that will improve quality of life and grow jobs.”

The Three-Star program has set high standards like no other state-run program in the nation. Governor Phil Bredesen’s five-year asset-based economic development strategic plan is the cornerstone of Three-Star.  The strategic plan addresses development issues and challenges a community is facing in an ever changing economic environment.  Additionally, it helps communities preserve existing employment, create new employment opportunities, improve family income and develop a strong leadership base for economic development.

In 2005, the Southern Growth Policies Board, a bipartisan public policy think tank devoted to strengthening the South's economy, recognized the Three-Star program as a best practices program and a Southern leader in community certification programs.  The Southern Growth Policies Board honored the Three-Star program again in 2010 with an Innovator Award for its unique partnership with the Tennessee Center for Performance Excellence.  TNCPE provides services to the communities that participate in the Three-Star program based on the Baldrige National Quality Program and provides feedback to help communities implement and improve their plans.

The Three-Star program is celebrating its 30th anniversary this year after beginning in 1980 as the “Three-Star Award for Successful Completion of the Community Economic Preparedness Program.”  Under Governor Bredesen, the Three-Star program has been revamped to include a benchmarking system for community excellence which raised the bar for performance. The program has now grown to 89 programs certified, representing more than 340 cities and towns.

In order to receive the certification, communities are required to meet criteria in planning, leadership, community, business and education and work force development categories. Incentives for receiving the certification include identification on all FastTrack infrastructure and job training applications; eligibility for matching grants, if criteria set by ECD are met; earning points in the Community Development Block Grant (CDBG) program; assistance from ECD’s Regional Economic Development Specialists and the sharing of “best practices” in community development; and the establishment of a strategic plan that is updated annually with measurable goals, specific actions, responsible parties and a timeline.