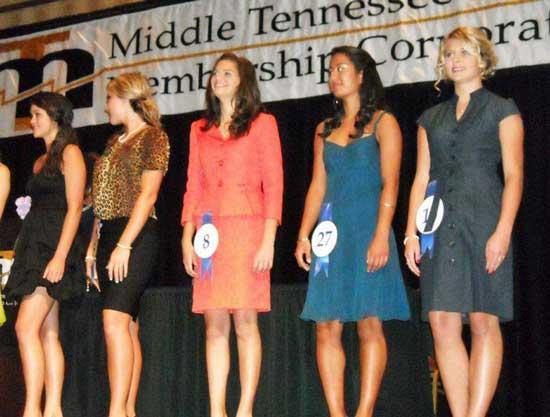 One of the main events was the Miss MTEMC Beauty Pageant. Three of Cannon County beauties placed in the top twelve finalists. During the final judging, each contestant was asked a question.

Contestant #10 Kayla Head of Readyville is the daughter of Ronald and Jacque Head and sponsored by the Friends of Neighbors of FCE Club. She is a CCHS senior and MTEMC Youth Leadership participant for 2010.

Contestant #7 Amber Campbell of Woodbury is the daughter of Grant and Bridget Holt and sponsored by Woodbury Lions Club. She is an MTSU sophomore and former MTEMC Youth Tour participant.

Response to on stage question as to what makes a good leader: Ms. Campbell responded a good leader possessed qualities of honesty and trustworthiness. She felt that participation in Lioness Club helped her develop these character traits.

Contestant #8 Mary Margaret Harris of Woodbury is the daughter of Joseph and Vicki Harris and sponsored by the Cannon County High School Lioness Club. She is a CCHS senior.

Response to on stage question as to how she would like to be remembered: Ms. Harris would like to be known as a happy-go-lucky-person. She added that she plans a teaching career with the opportunity to positively impact children.

Meryll Rose, NewsChannel 5 “Talk of the Town” co-host and producer was the emcee of the MTEMC Beauty Pageant.

Ann Cox was one of the 2010 Pageant Judges. She appears in the food demonstrations of “Talk of the Town” Channel 5.

EDITOR'S NOTE: There were four contestants from Cannon County entered in the pageant, including Taylor King. Correspondent Nichols was unable to make it into the beginning of the session and therefore was unable to photograph King or hear her interview.