Cannon Countians Spend A Day On The Hill 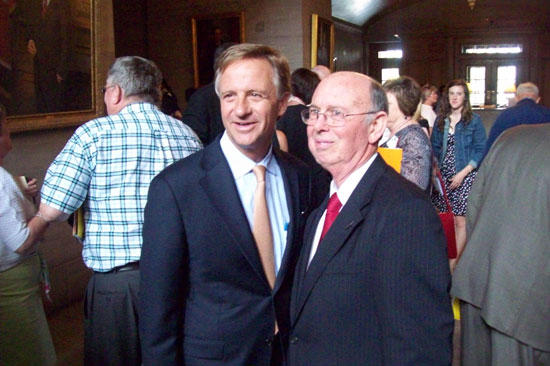 Governor Bill Haslam, left, poses with Bro. Herb Alsup of the Woodbury Church of Christ during the Cannon County Day on the Hill April 25.
Jeff Jones, Assistant Chief Engineer for the Tennessee Department Of Transportation, reviewed road projects during a special Cannon County Day on the Hill on April 25 at the State Capitol Building In Nashville.

Around 27 Cannon County residents made the trip to Nashville to sit in and sample a Senate session as well as a House of Representative session.

The House session included prayer and the reading of a bible verse led by Woodbury Church of Christ ministers Herb Alsup and Andy Walker.

Participants were treated to a full tour of the Capital as well as sessions with Scott Sloan, Director of Policy and Research, Director of Charitable Solicitiations, and Gaming office of the Secretary of State.

Ms. Lauren Plunk, who works in the office of the Comptroller as a small business advocate; Mark Goins, Coordinator of Elections; David Lillard, State Treasurer; Justin Wilson, Comptroller of the Treasury and Tre Hargett, Secretary of State, also addressed the Cannon County gathering.

Another of the many highlights of the day occured when the Cannon County participants posed with Governor Bill Haslem for a photo opportunity.

The Day wrapped up with the presentation of the road project review. The project currently under construction of Highway 70 south near State Route 281 which consisted of 7 miles of adding road in anticipation of the road that will be coming through to bypass the town of Woodbury is slated to finish in December 2013. The project was bid at $23 million.

The second project in Cannon County is the bridge over Hill Creek. The bridge is around 58 percent complete and is on schedule to be finished in November of this year.

There are currently four projects under development, and the one that would build a road to bypass the Town of Woodbury has been put on hold as it is in the environmental phase. The phase has yet to be approved  in order  for it to move to the next stage.