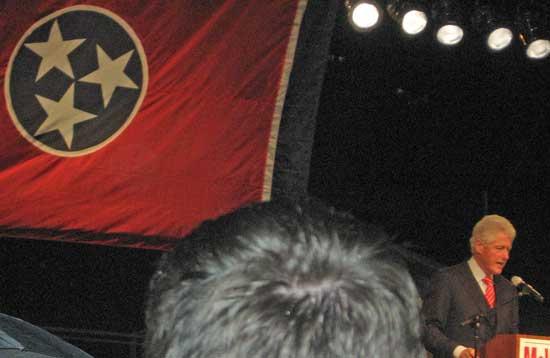 Former President Bill Clinton came to fire up the governor's race and Democrats.

Clinton urged everyone to talk about the governor's race and get people out to vote. He reminded Democrats there of the surplus when he left office and the deficit when George W. Bush departed office.

Clinton noted President Barack Obama has been in office only 21 months, which is not enough time to clean up the mess he inherited. Clinton stated the recession was due to the actions of Bush and the Republican majority in Congress for much of the 2000s.

The former president and governor said Tennessee needs a governor who will get jobs to Tennessee, as current Governor Phil Bredesen has worked to do.

"The Tennessee governor's race needs to be about what we are going to do and who is more likely to do it."

Thousands of enthusiastic supporters descended on downtown Nashville and gathered on the lawn of the Hall of Fame Park to join Clinton at the rally.

Following several speeches and an opening prayer by Rep. John DeBerry, Governor Bredesen introduced Mike with a speech in which he asked, “Why would you want to change course now? Trim the sails maybe, but turn the ship completely around? That doesn’t make sense.”

Upon taking the stage, Mike McWherter recounted his storied relationship with Bill Clinton and thanked him for his support. He also took the opportunity to highlight his opponent’s price-gouging in the wake of Hurricane Ike by stating, “In Nashville and throughout Tennessee, natural disasters are a time to help your neighbors and come together. For Bill Haslam and Pilot Oil, natural disasters mean only dollar signs.”

After an introduction by McWherter, Clinton took the stage and delivered an electrifying speech identifying obstacles Democrats must overcome to succeed in this election cycle. "There are three things we have too much of — too much apathy, too much anger, too much amnesia," said Clinton.

Clinton discussed his long relationship with the McWherter family and identified Mike as "the only candidate that's actually got a plan to increase the assistance to help small business expand" and build “on all the things Phil Bredesen has done.”

Clinton reminded attendees Bush’s economic policies generated “only 1 million more jobs before the recession” and that it took him “8 years to balance the budget and eliminate the deficit, which my predecessor had quadrupled before I took office and my successor[George W. Bush] doubled after I left.”

Typical Bill Clinton conforming a lie to trying to make you and I believe non-sense.

Of course this is also the man who said "I smoked pot, but I didn't inhale" and "I never had sexual relations with that woman, Monica Lewinski".

Keep on drinking the kool-aid and vote Democratic. It is really working now for America isn't it.

spatrick
[Delete]
If we can't give President Clinton the credit, why are we blaming President Obama now? Regardles of Clinton's morals which I do not approve of, this does not negate he was a good president and history will no doubt say so. I do not believe George W. Bush will go down in history as a good president. Leadership is so important to our country and our economy and we had a poor leader for eight years with Bush. Obama can't clean up the mess in a couple of years.
[Delete]
I don't believe George was a very good President either. Don't misunderstand what I am saying about him at all, because I believe he was a bumbling mess the entire eight years he was in office.

I just want the credit given to where it is due.

Obama may have been in office for only a year and a half, but things aren't getting better, they are getting worse every day. And to make matters worse, he is determined to do the exact opposite of what the majority of the American people who elected him want him to do.

The blame lies ten-fold more on the shoulders of the House and Senate than it ever does on any President.

I guess I have a different opinion of what makes a good President. I believe Bill Clinton was and still is an excellent politician, of that there can be no argument.

I don't believe any President regardless of what their party to be, either Democratic or Republican, who lies to the American people about having sex with a woman who is not his wife (in the oval office by the way), commits perjury, is censured by Congress, who allows the U.S. military to be attacked and does nothing about it, is impeached by Congress, etc. to be a very good President.

Knowing how to drive a car doesn't make you a racecar driver for Nascar and being a good politician like Bill was doesn't make him a good Preisdent.

dailyreader
[Delete]
The policies of the Bush administration, which included tax cuts during a time of war and a floundering economy, are clearly the primary source of the current deficits. The Obama administration policies—the American Recovery and Reinvestment Act in particular—place a distant third in contributing to the 2009 and 2010 deficit numbers.
[Delete]
Once again, Bush was President and the Congress (House and Senate) were both DEMOCRATICALLY controlled for the last two years of his Presidency.

You all can try your best to blame Bush for every single problem this country has ever faced and you still can't get around the fact that the Democrats had the ability, the votes and the know how to stop anything George Bush ever proposed and they didn't.


The 2009 and 2010 deficit numbers were brought about under a Democratically controlled government. They owned it, they voted for all of this mess and could have stopped it, but didn't.