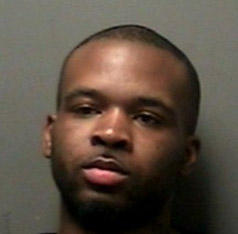 Cortavis Marable
A Murfreesboro man was arrested after kidnapping a woman and leading police officers on a high speed chase into Cannon County in the early morning hours Monday, according to a Murfreesboro Police Department report.
Cortavis Marable, 23, of Murfreesboro, is facing multiple charges including aggravated assault, aggravated kidnapping, car theft, simple possession and driving on a suspended license after a high-speed pursuit through two counties.
Marable's troubles allegedly began when he showed up at Pynthia Savely's house on Manor Drive, entered through her bedroom window and demanded she drive him to his uncle's house on Gardner Drive because he was running from the police, responding MPD Officer Julie Treadway reported.
Savely agreed and drove Marable to the requested address, but then he refused to get out of the car. Savely attempted to return to her home.
"Once they entered Rolling Acres (apartment) complex, Mr. Marable began to pull her hair and punch her in the face and told her she was going to do what he told her to do," Treadway reported.
Savely was able to stop, escape and run away from the car, but Marable wasn't done yet.
"Mr. Marable then got into the driver's seat of the vehicle, jumped the curb and chased her with the vehicle," Treadway wrote. "Mr. Marable then jumped out of the vehicle and chased her on foot. Mr. Marable caught her, pulled her back to the vehicle, opened the trunk and attempted to put her inside the trunk."
When that proved difficult, he allegedly opened the back door, shoved Savely into the backseat and slammed her foot in the door in the process.

Savely said she then kicked the backdoor open and was able to escape the vehicle.
He allegedly chased her on foot again through the apartment complex, caught her by the hair and forced her into the front seat of the car.
Marable then drove around the residential streets in Murfreesboro until Treadway encountered him on Eagle Street.
"I then heard a door slam and a female, later identified as Pynthia Savely, come running toward me screaming," Treadway said.
Marable then fled the scene "at a high rate of speed," Treadway said.
MPD began a pursuit of Marable down Middle Tennessee Boulevard.
"The vehicle then began attempting to swerve at numerous vehicles," pursuing MPD Officer Jacob Fountain reported.
The pursuit wove through neighborhoods, where Marable again allegedly tried "to strike innocent people" until he reached Bradyville Pike, Fountain said.
Fountain was joined in the pursuit by additional officers from MPD and the Rutherford County Sheriff's Office. Marable then traveled into Cannon County, eventually crashing the car and being arrested. He was then transported back to the Murfreesboro Police Department where a search of his person allegedly revealed "a crack pipe and a tissue with small granules of cocaine," Treadway said.
Marable was charged with aggravated assault, aggravated kidnapping, car theft, possession of drug paraphernalia, simple possession, felony evading arrest, reckless endangerment and driving on a suspended license charges. The Tennessee Highway Patrol charged him with DUI and violation of implied consent.
Marable was booked into the Rutherford County Adult Detention Center on a $63,500 bond and is scheduled to appear in court June 12.
Read more from:
CANNON CRIME
Tags:
Cannon County Sheriff's Department, Kidnapping, Murfreesboro Police
Share: