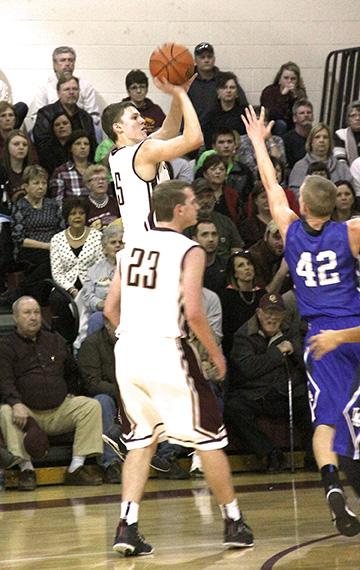 The Lions will move to the semifinal round of the district tournament at Cookeville High School.
Dekalb who finished in 7th place this season stayed in a 2-3 zone most of the night with CCHS having trouble getting inside into the lane.

Transition basketball gave the Lions the oppor-tunity to move ahead in the second quarter as they took a 7 point lead into halftime.

The Lions were able to maintain the lead the rest of the night but it was a tough victory.

Cannon came out on top 50-41. Josh Ruehlan led with 13 points. Dekalb County's Justin Bone hit a 3 pointer at the final buzzer giving him over 1,000 points for his high school career.

Cannon County Lionettes got a much needed District 8-AA win at the close of the regular season by beating rival Dekalb County 52-42.

Cannon did get off to a slow start in Smithville but three long-range 3 pointers from Kristen Hale pushed the Lionettes ahead.

While Dekalb was able to stay in the game, Cannon used a stretch in the fourth quarter to provide the final cushion they needed to get the victory.

Kelli Davis led the Lionetttes with 17 points .
Cannon ends the season 19-9 overall and placed 5th in the final district standings with a 6-8 district record. They will meet the Smith County Lady Owls Friday in the first round of the district tournament at Cookeville High School.

Livingston's Lady Wildcats held off a scrappy Lionette team to take a 60-55 decision, while Cannon County Lions wrapped up the regular-season boys title with a 72-51 victory.

Livingston scored the final four points of the to lead 29-23 at the half.

Keelie Lamb scored the first six points of the second half to give Livingston its biggest lead of the game at 12 (35-23). From there, the Lionettes started cutting into the lead and had it to 48-41 going into the final quarter. CCHS then got the lead to within two on three different occasions in the final eight minutes; however, the Lionettes could not tie the game.

Cannon County had one more chance late, as Kelli Davis was fouled with 17 seconds to play and the Lionettes trailing 58-54. She hit the first and missed the second, and the Lionettes got the offensive board and got two good looks at 3-pointers that would have tied the game. The second went in and out, and LA cleared that rebound to Lamb, who hit a layup as time expired for the final score.

CCHS (18-9, 5-8) was paced by Erin McReynolds with 17 points.
In the boys game, the Lions used a hot-shooting second quarter to beat Livingston.
After a 16-13 Cannon County lead in the opening quarter, Josh Ruehlen scored 15 of his game-high 28 points in the second quarter as the Lions outscored the Wildcats 26-10 ro take a 42-23 lead at halftime.

CCHS then moved out by as many as 26 points (53-27). Livingston got no closer than 15 in the final eight minutes as the Lions claimed the district title and the top seed in the district tournament to be held at Cookeville High School.

Cannon was led by Ruehlan's 28 points, while Jacob Nave added 17.