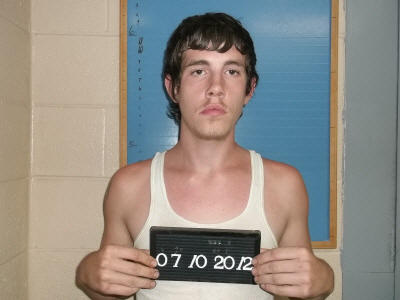 WILLIAM R. PRATER
Two Eugene Reed Road men were recently arrested in connection with break-ins at another address on the same road.

Facing charges of Aggravated Burglary and Vandalism Under $500 are Andrew Scott Asbury and William R. Prater, both of 935 Eugene Reed Rd., Woodbury. Prater was also charged with Theft Under $500.

Deputy Gullett was advised by a relative of the victim that pictures had been taken of one of the suspects by a camera that had been placed at the residence following the first break-in.

Upon viewing the pictures, Deputy Gullett was able to make a positive identification of Asbury, who he was familiar with from prior experience.

Asbury is allegedly shown walking up to the rear of the residence and then standing at the rear window and then attempting to get through the window.

After viewing the photographs Deputy Gullett obtained arrest warrants against Asbury and went to 935 Eugene Reed Rd. along with Deputy Perry on July 10. They were met by Asbury at the door and he was taken into custody. Prater, who was also present at the residence, was taken into custody in connection with the April 4 burglary.

Damage to the residence included screens being cut out of three back windows. Numerous draws had been pulled out from cabinets and desks inside the home. Five silver rings, gold chains and two pendants were taken during the April 4 burglary and were later located at Shotgun Count Pawn & Gun.