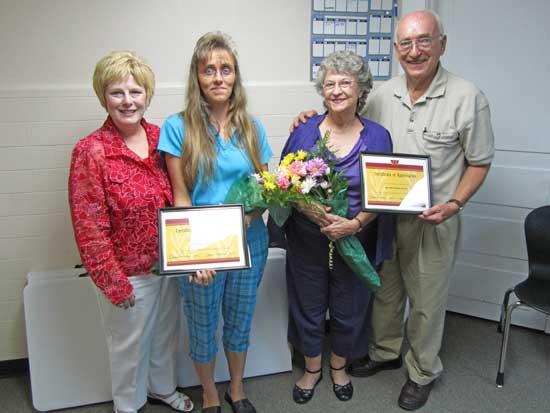 From left are Dr. Regina Merriman Cannon County School System’s Pre-K Director, Ms. Reba Rackley, Mrs. Dale Harrell, and Mr. Charlie Harrell.
The Pre-Kindergarten Advisory Council met for its first meeting of the 2011-2012 school year on August 5, 2011 at the Offices of the Cannon County School Board.

Cannon County’s pre-k program operates under the directorship of the Tennessee Department of Education’s Office of Early Learning.  Each year, the local school system applies for a grant allowing for the continuation of this program.

The purpose of the Advisory Council is to provide formal input into that application as well as reviewing yearly evaluations and making recommendations for program improvements.

At their recent meeting, four members were recognized for their service during 2010-2011.  These members were Mrs. Rhonda Brown, Mr. and Mrs. Charlie Harrell, and Ms. Reba Rackley.