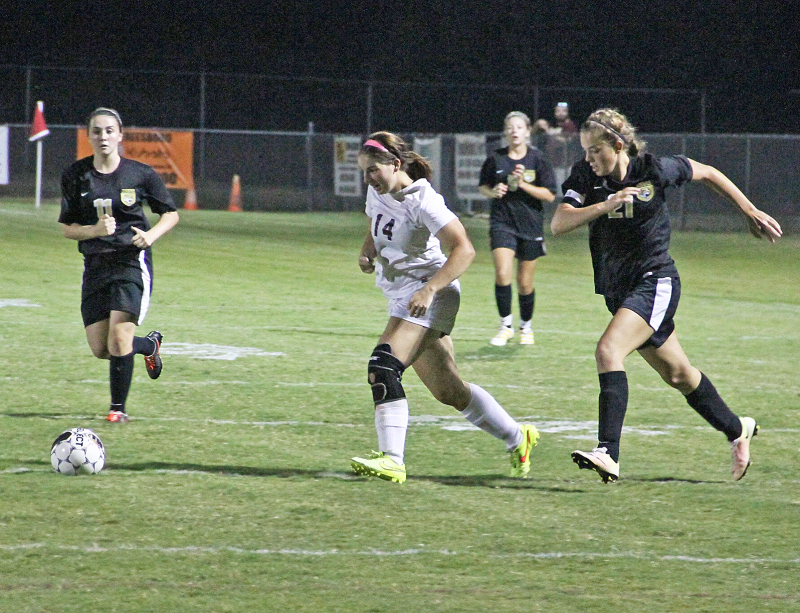 RONNY BURKS photo Ivy Vinson fighting for the ball in the DeKalb County game which ended in a tie.

Cannon County Middle Grade Cross County
The Middle Grade Cross Country team ran at the Warrior Invitational at Riverdale on Sept. 3. The Lionettes finished sixth overall, while the Lions were 11th overall.
Three days later, the team went back to Macon County and both the Lions and Lionettes won the overall.
The Lionettes had six runners finish in the Top 10- (Zettie Elrod- 2nd- 15:36.50), Kiley Hughes (3rd), Ade Hardwood (5th), Keilee Campbell (6th), Rudy Dearmond (7th) and Emily Morris (8th). CCMG swept the top six spots in the team standings, as the winner of the race was the only member of her team who competed for them.
The Lions had three runners in the Top 10- Jonathan Fann (4th- 13:18.00), Tyler Southworth (5th) and Mason Tramel (9th).
Volleyball team played Smith County and lost three sets to none (15-25, 10-25, 6-25) on Sept. 8.
Girls Soccer lost to DeKalb County 8-0 on Sept. 8. Freshman Patty Contreras had to go to the ER by ambulance after colliding with the goal post, according to Coach Walker.
Middle grade football lost to Red Boiling Springs 22-8 on Sept. 8.
CC Youth Football opened season on Sept. 3 at home against Watertown. Juniors lost 34-6, while the Seniors fell 14-6.

Cannon County Middle Grade Cross County
One of the best teams in the area opened their season on Aug. 20 with a meet in Lafayette at the Macon Bank & Trust Invitational. There was a total of 20 teams from around the state, and the Lions finished 12th overall, while the Lionettes were eighth of our 16 squads. Two of the Lions finished in the Top 40, including Tyler Southworth (25th- 13:26.20) and Jonathan Fann (40th- 13:47.50), while the Lionettes were led by three females in the Top 50, including Zettie Elrod (29th- 15:24.20), Kiley Hughes (47th-15:59.00), and Ade Harwood (48th-15:59.90)
"On the Macon County meet, I was not very pleased with their performance," Head Coach Brian Elrod said. "We did not hit our splits and our mileage like I wanted to. The one bright side is we beat Central Magnet for the first time. We know now we are better than they are. We worked really hard this past week over that, and we look good going into Riverdale now."
A few days later, both teams traveled to Warren County for the Aug. 30 meet, and they let their presence known in dominating fashion, especially in the girls 3,200 race. For example, the Varsity came in first and JV team's times were good enough to finish runner-up overall if it was a combo race. The Lions won the overall in the boys race, while all of the teams dealt with a heat index in the mid-90s.
"It was not a difficult course, it was a rolling hill course, and it was extremely hot," Elrod said. "We were prepared for it, because we run in the heat. They ran well, and Fann and Southworth had very dominating performances finishing one and two."
Zettie Elrod finished runner up in the girls race.
This past week, the middle grade teams head down 96 for the meet at Murfreesboro Riverdale on Sept. 3.

Cannon County High School Cross County
The Lions and Lionettes started off the season in winning fashion at the Voyles Classic in Smyrna on Aug. 27. Senior Hannah Whited won the girls 5K in an overall time of 20:57.42 to help the Lionettes finish runner up overall to Murfreesboro Central Magnet. The Lions were led by Austin Duggin, who finished 26th in a time of 19:46.52. Overall, the Lions finished fifth out of 23 very competitive teams.
A few days later, the high schoolers also traveled to Warren County on Aug. 30 running in the same type of hot conditions. The Lionettes won the female race, while the boys were third out of eight teams. Austin Duggin was first in the boys race, while Amanda Blanco and Isabella Russo finished second and third in the girls race. Both returning seniors Whited and Devin Gilpatrick missed the event due to sickness.
"It was very smart running today by the CCHS runners," CCHS head coach Marc Larson said.

Cannon County High School Girls Soccer
The Lionettes opened up the season on Aug. 25 with a 3-1 loss to Goodpasture. A few days later, they lost 4-0 at Marshall County in a makeup game due to lack of referees. However, they got their first point of the season with a 3-3 tie against Watertown on Sept. 1.
CCHS took a 2-nil lead in the first half with goals by Tori Jones from Amanda Blanco, and the reverse happen a few minutes later. However, Watertown answered with three goals in the second half to take the lead, but the Lionettes fought back to even the score with a goal by Ivy Vinson from Baily Knox to end the game in a tie.

Cannon County High School Volleyball
It has been a tough start for the Lionettes as they have been swept in three games in their first five matches of 2016 to Warren County, Murfreesboro Central Magnet, Macon County, Smith County and Livingston Academy.
At the same time CCHS new head coach Angela Hale has been pleased with their improvement with each match.
"The girls have been getting better, blocking better and attacking better," Hale said. "People have come up to me to tell me that they are 100% better than their first match."
Cannon County High School Golf
After winning their first three matches of the season, the Lions have either completed their round in second or third in the past five matches, including a runner-up finish on Aug. 30 at Southern Hills in Gordansville. Luke Jakes led the way with low round of 45, while Chris Young scored a 46, and Bradly Vickers completed a 47 with the total team score of 193. That was second behind Upperman round of 163, while the host was third with a round of 206.


Cannon Middle Grade Football
The Junior Lions opened the 2016 season with two losses at Dekalb on Aug. 25, 28-8 and Sept. 1 against Caral Oakley 22-0. However, the team has only had 12 players during those two defeats. Good news is coming for the CCMG team as six new players have joined the team, according to Head Coach Jason Elrod.
"It is getting these kids in here, practicing, and working together on offense and defense," Elrod said.