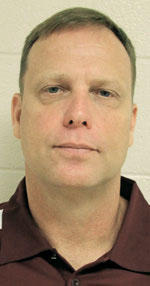 Following an extensive search and weeks of interviews, Bush, 49, was offered the position Friday morning and was introduced as the new head football coach during a team meeting Friday afternoon.

“It is always a privilege to have an opportunity to coach young people,” Bush said. “I didn’t have this on my radar when I came back to Cannon County (last August). I was retired from the military and wanted to contribute to my community, teach high school and help with the football program. This is an opportunity that presented itself. I got an opportunity and I am going to work hard at it.

“I want to thank (Director of Schools) Barbara Parker, (CCHS Principal) Tim Knox, (CCHS Assistant Principal) Kay Barker and (CCHS Athletics Director) Michael Dodgen. They have all been supportive of me and my transition from the military.”

Bush has over 22 years of service in the military with seven years overseas and two years of combat experience. He is a veteran of Desert Shield/Storm, Iraq (two tours) and Afghanistan.

“With Coach Bush’s experience in the military he has led units of men into much tougher missions than a Friday night football game,” Dodgen said. “From a discipline standpoint we are getting a good guy. He has been through it all. He does a good job motivating kids and his leadership is a positive. We were looking for a quality coach for our program and we have found that.”

Bush said having the opportunity to work with Schrenk on the staff last season and getting to know the returning players will be an asset.

“The best thing about being a coach, mentor or teacher is that you make such an impact in young people’s lives,” Bush said. “You have to take some time to step back and realize that what you say and do is important. Having the opportunity to work with the kids and get to know them this year will be a big help. That will help make the transition easier because I know who is here, what we have and what needs to be done.”

Bush also sees his military background as a positive.

“When you are building teams every part of that team, every section and unit, must realize they must work together for a common purpose,” Bush said. “In the military you had to help young people adapt and learn and prepare to accomplish a mission. The purpose is to win and win the right way.”

“Coach Bush played for a great football coach in Boots Donnelly and he has a passion for getting this done,” Dodgen said. “Coach Bush has to surround himself with a good staff that is willing to put in the hours and time. (Bush) is getting his start at a later age but he is excited about the opportunity and it means something because he is from Woodbury. He is a Cannon County native. It is very important for him to get the program going in the right direction.

“When you are trying to build a solid program it is good to have someone that knows the dynamic of the situation. (Bush) knows what is in front of him and it is a big task.”

Bush has already announced that T.J. Daniel will be a member of his staff. He will spend the coming weeks filling out the remainder of the staff.

Print
Members Opinions:
jj54
[Delete]
woo hoo, now focus on getting wins not discipline alone.
lionbasketball
[Delete]
to jj54...you can not have one, without the other. One should not trade wins for teaching kids to lack discipline.
out4Areson
[Delete]
Maybe now the Dad's can watch from the stands...an stay out of your way. congrats Coach Bush an good luck you will need it.