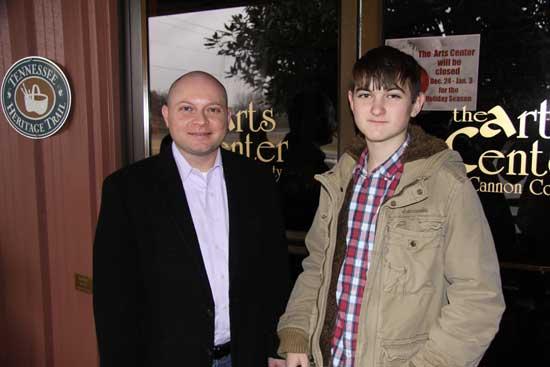 Coach Micheal Burt will launch his “Small Towns, Big Dreams” tour at The Arts Center Saturday. All proceeds will go to Juvenile Diabetes. Burt, left, recently joined Luke Blanton, who is diagnosed with Juvenile Diabetes, to promote the event.
It only makes sense that Coach Micheal Burt would begin his “Small Towns, Big Dreams Tour” in Cannon County.

After all, Cannon County is home.

“All of my dreams started here,” Burt said. “All of the people who touched me, who helped me get where I am today, they are right here in Cannon County.”

Now Burt, a successful coach who traded in his whistle to begin a career as an author and motivational speaker, is looking to give back to his hometown through his “Small Towns, Big Dreams Tour” in 2011.

The tour kick off at The Arts Center of Cannon County Saturday (Jan. 8) at 5:30 p.m. Tickets are available for $35 and $25 with all proceeds going to Juvenile Diabetes. Burt’s goal is to raise $10,000 for Juvenile Diabetes during the one-night, life-changing event.

The Tour includes live music, guest speakers and a night of inspiration. Each of Burt’s stops focus on a cause specific to people in that particular town. Burt said Juvenile Diabetes was chosen for Cannon County because of people in his life who were touched by the disease.

People like Korie Aycock and Michael Sellars, who attended Cannon County High School with Burt. Aycock and Sellars have children who are diagnosed with Juvenile Diabetes.

“I will go into the community and find people who are real passionate about a cause that needs attention and awareness,” Burt said. “When I  thought about Korie and Michael Sellars, who I went to school with, they are friends who have been affected by this. I knew these were people who would become passionate about this and help drive people to this event because we are donating all of the money to the cause. That’s how I picked (Juvenile Diabetes) for Cannon County. I was real impressed with what they did for the Walk for Juvenile Diabetes and I know these people so the question was, ‘How can I help?’”

Few charitable donations provide as much for the donor as this one.

For a $35 donation to Juvenile Diabetes, patrons will receive Burt’s most recent book, “This Ain’t No Practice Life,” which already has sold more than 30,000 copies, light food, a ticket to the event, which features live music from Cannon County native Stephen Simmons, who has released five albums in the last five years, and guest speakers.

“Our goal is to raise $10,000 in one night and if we can pack (The Arts Center) with 250 people then we are going to get close to reaching that goal,” Burt said. “A lot of times with charities we get asked to donate to a cause and we get the gift of donating the money and that’s the gift. We try to flip that around to where you get a gift by coming, and the gift is if you want to do something big with your life that night we are going to show you how.

“I am going to give you a blueprint that says here are the things that will help you go from where you are in life to where you want to go, so not only do you help the cause, but the cause helps you. It’s a different twist on a charity event. You could walk away thinking that night helped change your life or helped me become what I was capable of becoming.”

The action-packed evening begins at 5:30 p.m. with a reception at The Arts Center. VIP Tickets are $35 and include light food and the reception. The $25 ticket does not include the reception or food.

Following the hour-long reception, where Burt will be available to autograph, “This Ain’t No Practice Life,” patrons will be treated to the sounds of Simmons, guest speakers telling the story of Juvenile Diabetes, and the evening concludes with Burt’s presentation regarding his newly-released book.

Burt does not receive compensation for stops on his “Small Towns, Big Dreams 2011 Tour,” which includes stops in Lexington, Ky., Hunstville, Ala., Knoxville, Chattanooga, Jackson, among other cities. All monies generated go to the charities the Tour supports in that particular town.

Burt’s new radio show, “Change Your Life Radio,” can now be heard on WBRY in Woodbury each Sunday at noon. The show is one hour of positive energy, talking about leadership, personal growth and development.

Print
Members Opinions:
[Delete]
Do we pre-buy at the Arts Center?
korieaycock
[Delete]
You may purchase at Woodbury Funeral Home, State Farm - Woodbury, Dr. Darryl Deason, or First Natinal Bank. Thank you for your support!