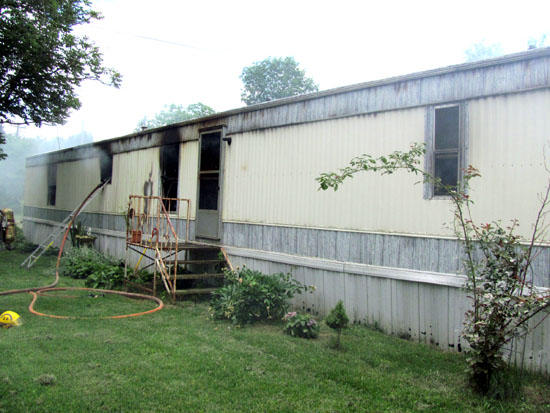 Mrs. Burma Sullins, 1531 Burt Road, told the deputies that her grandson, Patrick J. McCullough, 28, of 456 Burt Road came to her home and asked her to take him to town. When Mrs. Sullins refused, Patrick left Mrs. Sullins home and was gone about 15 minutes. When he returned he told his grandmother he had set his mother's (Deborah Lynn Parker) trailer (at 456 Burt Road) on fire.

Mrs. Sullins stated that Patrick then turned around and went back toward his mother's house and that Debbie, Patrick's mother, when out and looked and said, "Oh Lordy, momma he set it on fire."

West Side, Bradyville and Woodbury volunteer fire departments responded to the scene but the trailer was a total loss.

McCullough left the trailer before deputies arrived. Officials searched the immediate near the fire but did not locate McCullough. Investigators are expected to confer with the District Attorney’s office on Thursday concerning the issuance of a warrant against McCullough.

The investigation is continuing.

Print
Members Opinions:
[Delete]
What is the truth?