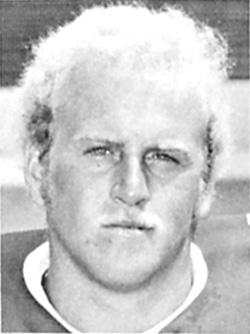 STEVE BULLARD (photo courtesy Austin Peay State University)
Those who coached and knew former Woodbury standout athlete Steve Bullard remember him as not being the biggest or fastest athlete on the field; however, what he lacked in size and strength he more than made up for in desire, passion and humility.

Bullard, 53 of Joelton, Tenn., passed away Sunday, May 23 at St. Thomas Alive Hospice. Funeral services were held Tuesday, May 25, at Cheatham County Funeral Home. He was buried in the Will Smith Cemetery in Ashland City.

Bullard starred as a receiver and safety on the gridiron for Woodbury Central in 1974, helping lead the Lions to their first 10-0 season - a feat that has not been duplicated since. It was Bullard's only season to play high school football but it left a lasting impression and helped pave the way for future personal success.

"He was just a natural athlete," former Cannon County football coach Mike Mayfield said. "It was just unbelievable what he did on the football field and had he played more than one season there probably would have been several of the bigger schools after him. He only played the one season because of various factors but he was something to watch."

Bullard was a three-sport star who was most known for his play on the football field. He intercepted two passes in his first game as a Lion, running each back to the 10. Mayfield recalls another game against a top-ranked team where Bullard intercepted a pass in the Lions' end zone and also had a 86-yard touchdown reception to give Woodbury a 7-0 lead.

And then there was the memorable game against Lynchburg, which Woodbury had not beaten in 25 years - until 1974. Lynchburg was unbeaten and had been unscored upon but Bullard caught two touchdown passes and ran the second half kickoff back 90 yards for a touchdown. By the time the smoke had cleared Bullard had led Woodbury to a 22-87 win.

Woodbury Mayor Harold Patrick called the action for local radio and he remembers Bullard as one of the best all-around athletes ever to play in Woodbury.

"He was absolutely one of the best I've seen play here through high school," Patrick said. "He wasn't big, maybe 5-foot-11, 165 pounds, but he had talent and he just played. What stands out to me is how hard he played. (Bullard) gave you his heart and soul the entire game. What he may have lacked in talent he made up with his heart, passion and tenacity."

That's how Hall of Fame Coach Boots Donnelly remembers Bullard. Donnelly signed Bullard to play football at Austin Peay following a stellar two-year career at Northeast Mississippi Junior College. Bullard helped lead Austin Peay to its first and only Ohio Valley Conference football championship in 1977. In fact, it was Bullard who hauled in the game-winning touchdown with 30 seconds remaining to beat Tennessee Tech and give Austin Peay the title.

"Bullard had, without a doubt, as soft a pair of hands of any kid I have ever coached," said Donnelly, following Bullard's funeral Tuesday. "He was a great receiver for us at Austin Peay. He was a tremendous athlete and a very humble kid. He was just a very, very good player and late in life he became a better person than he was an athlete."

Donnelly said Bullard left his mark on the young people he taught and coached in Cheatham County.

"He had a knack for getting along with people and with people that for whatever reason had problems," Donnelly said. "He left his mark on the people who came into contact with him and he was great with special needs children. He had a big place in his heart for them."