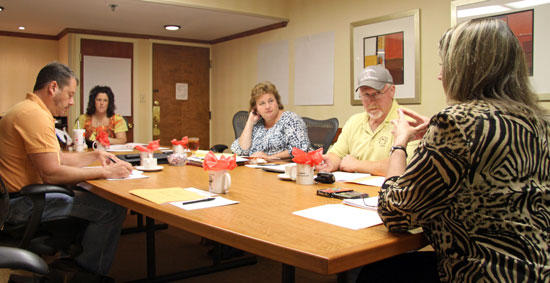 Members of the Cannon County School Board held a retreat at The Doubletree Hotel in Murfreesboro (6/1). Clockwise, from left, Chris Blackburn, Shannon Davenport, Cathy Hyatt, Randy Gannon and Director of Schools Barbara Parker discuss key points.
MURFREESBORO - Most students are out of school for summer break but the Cannon County Board of Education remains hard at work as it puts together the plan for the 2010-11 academic year.

Members of the Cannon County Board of Education held a retreat at The Doubletree Hotel in Murfreesboro (June 1) to discuss a number of topics related to next school year, as well as discuss various budget items prior to presenting it to the County Commission for approval.

"This is always a busy time as we are closing out the old year and starting the new year," Parker said. "School is never out. We are here to maximize what we are doing and to make sure everyone is on the same page. We want to solidify the budget as we are close to presenting it to the County Commission for approval (at the June 10) Board Meeting."

Parker also reported that a bus rotation schedule will be used. Cannon County Schools purchased a new bus for the previous school year and is proposing a new one for the upcoming school year. New buses cost in the $75,000 range. When new buses are purchased the oldest bus goes on "stand-by" status, Parker said.

Eighth-grade students who took part in the Algebra I online course demonstrated improved numbers in math. Of the 18 who participated, 17 accepted their grade. Student have the option to accept the grade or take the course in high school

"We need to track these students and chart and follow their progress as they enter high school," Gannon said. "With teachers in the classroom with them, these students should do even better than they did during the online course."

Parker pointed out another positive to the online course was that students had to learn to be committed and independent to complete the task. Davenport pointed out these type of programs encourage parent interaction. Online courses always will be an option whether grant money is available or not, Parker said. If grant money is not available then students' families are responsible for the cost.

There already is a waiting list for such courses for the 2010-11 school year.

Early graduation also was a topic during the retreat. Students are able to take online courses to advance and up to 20 Cannon County students will be taking advantage of this opportunity, Parker said.

"Some of those will possibly graduate as seniors next year," Parker said. "These student have to be ranked by the same standards as the class they are entering and the student has all the full responsibilities as rising seniors."

These students would qualify for senior trip and senior promotions.

The new one-hour lunch that was introduced last April will be in full effect for the 2010-11 academic year. Parker proposed the idea last year and it was introduced at the end of April when seniors went on Senior Trip.

"We did it then because we wanted to get some of the kinks worked out," Parker said. "It will be full-time from the beginning this year. We saw a benefit in the short time it was introduced at the end of this school year."

Instead of a rotating lunch schedule all students go to lunch at the same time and have a one-hour lunch, Parker said.

"In addition to having enough time for lunch students also have time for extra physical activity (gym), and they have extra time to go to teachers for help," Parker said. "This can be help with homework or to make up a test so they are not getting behind. The main purpose is to give students time to do school business on school time."

Parker also reported that Cannon County had seven teachers with 25-plus years of experience retire following the 2009-10 school year. She also pointed out to the Board that there is a bill being considered that would allow a GED to count toward graduation; however, that bill has not been voted on as yet.