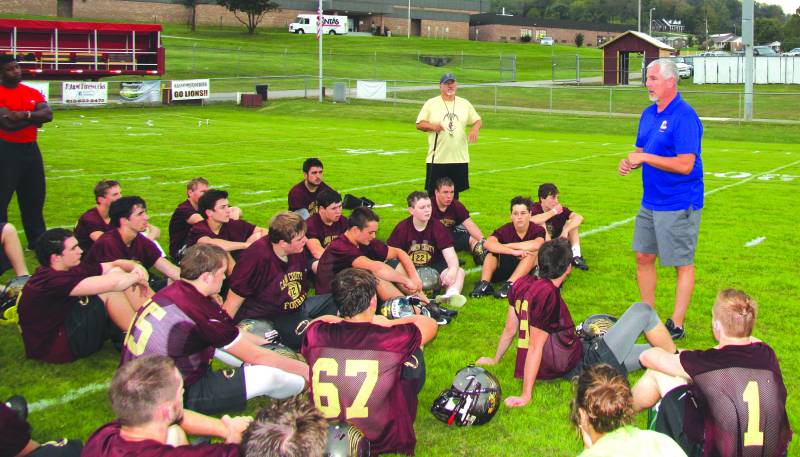 The Cannon County football team has been through a tough stretch the past few seasons as winning only three games since taking the district title in 2009. It has not been for a lack of trying, or internal team issues. Instead the Lions have put their faith in God, which has brought the team together and taught them a valuable lesson about dealing with adversity.

Proverbs 17:17 says, "A friend loves at all times and a brother is born for adversity."

Even during tough times, as with most teams in sports, these Lions have done several things hoping to bring the squad together. Some of those team building, faith-based attitude exercises include attending different churches around the area, listening to devotionals before the big game, and watching religious football films.

"It is not something most teams do," CCHS senior quarterback Brady Page said. "We get together as a team and we go do something that is bigger than ourselves, even bigger than football."

The idea of these faith-based trips came from current Lions head coach T. J. Daniels a few seasons ago.
"It is hard to explain, because we went one year and it just snowballed," Daniels said after practice a few days ago. "Churches wanted us to come and visit, and we said, 'This is a good thing.' We do not make it mandatory. We are like, 'Hey we are going to church together, and we would love for you to go.' We go visit and they feed us. It just kind of happens."

During the past few seasons, the Lions have attended several area churches from varied viewpoints, First Baptist, Woodbury Church of Christ and Ivy Bluff. Many of the sermons touch on life's lessons both on and off the field.

"The focus of our message while hosting the football team centered on the deeper meaning of the game and winning," First Baptist Church of Woodbury Pastor Dr. Hunter Hay said via email. "Having had the opportunity to play football I took the time to speak to the standards we use for determining who is a winner. For a football team we say it is the scoreboard. For a farmer, we measure winning by saying it is the number of acres that are owned and tilled. For people, we measure being a winner by the number of square feet of their home, or our 'imagined' size of their savings account. Often in life, winning has little to do with these external measurements. The win that comes from playing the game is not reflected in the score, but is reflected in lessons learned from the game; not giving up, maintaining our focus when we are tired, the necessity of completing my assignment as a part of the play recognizing our part in what it means to be a team, understanding and trusting authority, maintaining emotional control when you want to explode, and respect for honest play."

In addition to attending the different churches, the Lions listen to a devotional given the day before the game by Andy Herzer, founder of the 1st Shot Organization and a former MTSU basketball coach. Similar to what the players gather from their church visits, Herzer gives faith based life lessons dealing with adversity and other topics to the players and the Lions coaching staff.
"More importantly it is about growing individuals, and I think sometimes as coaches, and I was one of them when I was in college, we care so much about skill development and winning games," Herzer said before this week's devotional to the Lions. "We forget a vital part of it and that is the spirit of a man and building it up. So when adversity comes, and it comes in everybody's life, they have some character and substance about them that can help them. It helps them when they hit adversity, and it grows them when they face it and make mistakes. It is what they do after mistake that matters most. That is the essence of what we tried to do this year with the Lions."
The players get a lot of good advice from listening to these devotionals, and it has helped them focus for the upcoming game.
"The devotionals make us reflect on ourselves, and what can you do better the next week," CCHS sophomore lineman Cole Hill said a few weeks ago after one of the sessions.
Lions wide receiver Jeremy Litchford added, "Andy (Herzer) coming in and talking to us has really helped a lot. It gives us courage and different aspects of what he has been through. It helps us a lot."