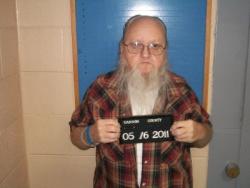 JAMES KAISER
Cannon County Sheriff’s deputies battled their way through a barrage of bullets last month as they worked to take a man who had apparently suffered a breakdown into custody.

Deputy Brandon Gullett was dispatched to the address along with Deputy Mike Smith. While en route Cannon County Dispatch advised them Kaiser was armed with a gun of unknown caliber. Dispatch also advised he was firing shots.

At this point Deputy Eric Moss, Reserve Officer Glenn Mitchell, Deputy Lawrence Avera, Deputy Tommy Barker and Reserve Officers Grady George and Alan Morris were also en route to the scene. Reserve Officer Morris advised he would be standing by at the end of the driveway waiting for other units to arrive at the location.

Deputy Gullett advised all units to turn off their sirens as they approached the location. Dispatch then advised Deputy Gullet that Kaiser was inside the residence, firing shots out the window, and that his wife was inside.

Dispatch next advised, as deputies Gullett and Smith got closer to the scene, that Kaiser had gotten a rifle along with the pistol he had been firing and gone to the front yard.

Upon arrival Deputy Gullett was advised by Dispatch that Kaiser was firing shots and stating he would not be taken alive.

As officers were searching for Kaiser in the woods near his home, he began firing shots at them. The deputies ran to take cover behind a mini barn located near the residence.

While deputies tried to locate a muzzle flash or direction from which the shots were coming, a bullet came over the heads of two of the officers. One of the deputies returned fire. Kaiser then fired at least eight more shots in their direction.

Deputies tried to communicate with Kaiser, advising him to drop his weapons and to come out with his hands up and that no one needed to get hurt.

Deputies then approached Kaiser with guns drawn and located him approximately 30 to 40 yards from the mini barn. He was lying on his belly. A 30-30 rifle was at his left side with his hand on it and a .38 revolver was in his back pocket. All shells in the revolver had been shot.

Deputies Gullett, Smith and Avera placed Kaiser in custody. The weapons were secured and given to Deputy Barker.

Kaiser was transported to the VA Hospital in Murfreesboro for an evaluation. Reserve Officer Mitchell rode with Kaiser as Cannon County EMS transported him to the hospital.

Upon his release on May 16, Kaiser was transported to the Cannon County Jail and served with eight arrest warrants charging him with aggravated assault.