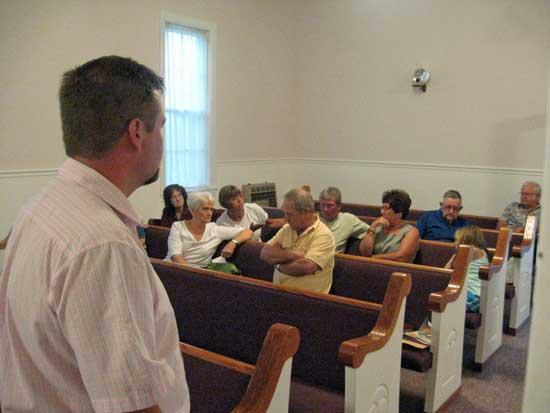 Members of the Bradyville Neighborhood watch listens to Cannon Co. 911 Director Roy Sullivan speak Saturday,
One of the most attractive qualities of rural living is the spaciousness of the countryside. The breathtaking scenery of Cannon County and peaceful solitude is a primary reason that folks born here stay and others are attracted to the area. But, while rural people derive great satisfaction in living where there's "lots of elbow room," criminals are beginning to taking advantage of our distant neighbors and lack of sheriff patrol cars in rural areas.

The Bradyville Neighborhood Watch met Saturday to discuss issues of concern and to hear from 911 Director, Roy Sullivan. Some of the complaints from the members where lack of adequate response from the sheriff’s department when they were contacted regarding safety and security issues, and the high cost of homeowners insurance when compared to neighboring counties and communities based upon comparable crime rates for the different areas.

One family in attendance happen to be real estate investors who live in the Bradyville area, and while they invest in Cannon County, they also have investment properties in areas such as Smyrna and they pay a higher rate for their home owner's insurance in Cannon County. An obvious concern was how to make all of us safer in our homes and how to bring those rates down in Cannon County.

One couple, new to the area and unidentified, complained that they had called the sheriff's office directly and voiced a concern about someone shooting guns at the foot of their long driveway. After waiting to be contacted by the sheriff’s patrol, the couple re-contacted the sheriff's department and was allegedly told the deputy could not get up their driveway.

It was suggested to the couple by members of the Watch group that they should call the 911 dispatch center to record their concerns and complaint. During the meeting the couple became defensive about another issue and left so further details were not available to pass on to the sheriff or follow up for a resolve.

Roy Sullivan attended the meeting and made a great presentation regarding the advances with the 911 Center and most specifically the Reverse 911 capabilities which allow Cannon County residents to be alerted regarding situations such as the recent escape from the Cannon County jail. Another recent use of the Reverse 911 was the alert of a missing youth that was thought to be disorientated in need of medical attention and thought to still be within the county.

Director Sullivan  not only explained the progress made to our dispatching system since the 911 Center became independent from the sheriff's department, but also spoke of a few remaining shortcomings. One is the inability to deal with multiple 911 calls made from cell phones. The center is limited to the number of 911 calls that can be made directly into the center at one time by cell phone.

This becomes more of a problem each day as residents become more and more dependant upon cell phones for all of the communications. One suggestion by Constable Jim Gibbs would be to program into your cell phone the non-emergency number to the Cannon County 911 Center, that way you will always know that your call is going to the center and not being automatically routed to either Rutherford County or Warren County which in turn has to re-route the call back to Cannon County. Your call may be taken in order of being made, but it will at least be answer by a Cannon County employee.

Another issue is the increase of calls by citizens when the Reverse 911 system is used. Either concern or curiosity will cause a sometimes overwhelming number of phone calls back to the 911 Center which requires additional staff to handle. Perhaps further countywide education about the system will help elevate unnecessary calls back to the 911 Center during moments of crisis.

Director Sullivan when asked also pointed out that Cannon County dispatchers write their logs by hand as opposed to have keyboards to quickly record information coming across their desks. Regardless, the Cannon County 911 Center has become a model for the future of rural emergency services dispatching.

During the February meeting, the Bradyville Neighborhood watch weighed in on the constable issue and agreed as a group to support Cannon County Constables having law enforcement powers. The members of the Watch are almost all exclusively voting members of the Cannon County First District represented by Mark Barker and Russell Reed. Mark Barker has always supported the constables but Russell Reed voted each and every time against the constables and against the recommendation of the Bradyville Neighborhood Watch.

One Watch member, Lillian Todd, even appeared before the Board of Commissioners in April and July and made an excellent argument for retaining constables with law enforcement powers. Commissioner Reed was invited to attend the Watch meeting to explain his vote to his constituents and to offer an explanation as to why he disregarded their wishes, but he failed show up for the meeting.

Of major concern of the members in attendance is that lack of communications regarding crime occurring in the Bradyville area and nearby communities. Members reported having heard about incidents of burglary and theft in the community, but not any details or any warnings that would help neighbors be on the lookout or be on guard to prevent themselves from becoming victims.

Members believed that not all incidents were being reported to the media and even if they were, the printed version of the Cannon Courier is weekly and the time lag is an issue.  It was pointed out by Constable Jim Gibbs that the online version of the Cannon Courier is frequently updated during the day but that there seemed to be a time lag between incidents occurring and crime reports being made public and available to the Courier.

One major incident that spotlights the lack of information issue was a murder that occurred just a few short miles from the center of Bradyville in Rutherford County.

Kevin Barrett of 6811 Burks Hollow Road just east of Bradyville in Rutherford County, was brutally murdered when he came in from the fields and walked in to a home invasion robbery. When he became aware of what was happening, Kevin ran back outside and was shot from behind by the intruders. Two suspects have been arrested by Rutherford County, and one listed a home address on Bradyville Pike in Rutherford County just miles Bradyville. That homicide was reported in the Daily News Journal, but the close proximity to Bradyville went unnoticed accept by those who knew precisely where Burks Hollow is located.

Several members expressed a desire to meet more often and to even meet socially to increase communications between members. The members of the Bradyville Neighborhood Watch exchanged email addresses to support an expansion of the old phone tree system to alert neighbors of issues and concerns. The Bradyville Neighborhood Watch created a Blog website to assist in communications between members which can be found at http://bradyville.blogspot.com/

Print
Members Opinions:
[Delete]
I have not had any problems obtaining information from local law enforcement. The only times information has not been forthcoming is when a case is still under investigation. Any delay in information being reported most often has to do with my limited time. One problem related to investigating crimes in some areas of our county, such as thefts, is often the perpetrators are crossing the border and then returning to their home territory, making tracking, identification and apprehension more difficult. That's one area in which the Bradyville Neighborhood Watch can assist.
jimgibbs
[Delete]
Hi Kevin – The incident that came to mind when I made that statement during the meeting occurred in the Gassaway-Liberty area in April. A local citizen under mental stress threaten to harm himself and then fired shots at the deputies when they arrived to investigate. The incident occurred April 16th and was not reported in the Courier until May 21st. While the individual was admitted to the VA Hospital during the time lag before the incident was publicized, some people including myself would have appreciated knowing that a potential for harm to citizens was present. Of course we all wish the poor fellow the best, we would just like to know if we have a potential for danger to our families as soon as possible.

It would also be nice if the sheriff would investigate having Crime Mapping online so we can see where and how much crime is occurring around us.
[Delete]
jimgibbs, I am positive that if a "potential for harm to citizens was present" the sheriff would have notified the public of such. However, as you mentioned, the person who committed that act was in the VA Hospital. Upon his release, charges were levied against him, which is the news I reported.
Leatherneck
[Delete]
Our Bradyville Neighbors are setting a great example with their Neighborhood Watch Program!

I have spoke with Sheriff Darryl Young, Constable Jim Gibbs, Detective Bill Sharp, West Side VFD Members and others about getting our West Side Community up and running with the same program. There have been a number of break-ins in our area too.

Is there enough interest from our Community to get busy on this?