Boys headed 'Back to the Future' 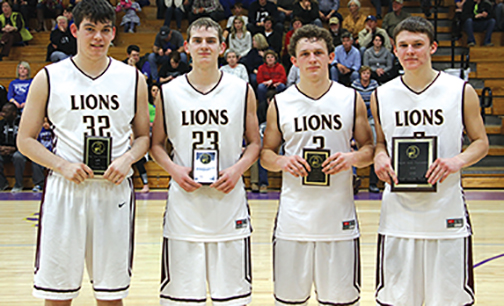 Named to the All Tournament team were L-R Austin Martin, Jacob Nave, A. J. Daniel and Josh Ruehlen Tournament MVP

By DAVID HUNTER, The Cannon Courier

Back 30 years ago, gas was only $1.09, the popular movie Back to the Future came out starring Michael J. Fox, and the Cannon County boys basketball team last played in the TSSAA state tournament

Now, gas is more than two dollars, and Lions are one win away from advancing back to state tournament for the first time since 1985.
After last weekend's District 8AA championship game was cancelled, because of the winter storm which hit the Volunteer state. The Lions went back to work for the Region 4AA tournament, but first they had to win two survive and advance games in order to compete for a region title and a chance to make it back to Murfreesboro for the state tournament.

First up was the Signal Mountain Eagles in the opening round of the region tournament at home inside the Robert A. Harris Gymnasium on Feb. 24. Coming in CCHS had only played two games in two weeks, but it proved rust would not be a factor as it jumped out to an early 16-4 advantage in the opening quarter thanks to some tremendous long distance shooting by District MVP senior Josh Ruehlen and great defensive pressure to open up a big lead.

CCHS never looked back as it rested the starters after three quarters, and it advanced to the next round in Dunlap with a convincing 68-39 victory over the Eagles.

"It has been a long time since we played, so we were ready to get out on the floor," Ruehlen said after the win. "Our defense got us going, and we hit some shots on offense. We never looked back."

Both the players and coaches knew what was at stake with it being win and stay in instead of lose and your season was done.

"We knew it was an elimination game coming in, and we were ready to play, especially after the break," Ruehlen said.

He finished with 22 points, while Nave had eight, and senior Garrett McReynolds added 10 for the Lions.

Next up for CCHS was a meeting with Notre Dame in the region semifinals on Feb. 27 with another survive and advance game on the line with an automatic berth in the substate. The Lions fell behind early to the Fighting Irish in the first half, and they were down by one, 31-30 at the break. However, the second half belonged to CCHS, and its season continued with a 77-65 win over ND.

"We just did not adhere to the scouting report early in terms of what we wanted to do," CCHS head coach Matt Rigsby said after the win. "Notre Dame is a solid basketball team. They played lights out in the first half."

Ruehlen had 32 points in the win, while Nave added 19, and Garrett McReynolds chipped in with 14 for the Lions.

The sectional berth was theirs, but now they had to play district rival Livingston Academy the following night also in Dunlap to figure out where the next game was to be played for CCHS. A win gave the Lions the region title, and a home sectional game tomorrow night. It was another hard fought game between the district foes, but CCHS pulled out a 63-59 victory, which gives them the home sectional. It also puts them one step away from advancing to state for the first time in 30 years.

"This bunch is such a special bunch, and I am not talking about what they do on the floor," Rigsby said after the win over ND on Feb. 27. "I am talking about each player, 1-14, but I am thankful we get to extend our season and spend more time with them. They are a privilege to coach, and it extends us to the substate. It allows us more time to coach them."

Ruehlen finished with 17 points, and he was named Region MVP. Junior Austin Martin added 15, while senior A.J. Daniel had 14, and Nave chipped in with 12.

All three players were named to the Region All-Tournament team.

The Lions are now 28-5, and they have not lost a game since New Year's Eve.

Their winning streak is now at 15 games in a row, and they host Region 3's title game Chattanogga Brainerd Thurday night inside Robert A. Harris gymnasium.