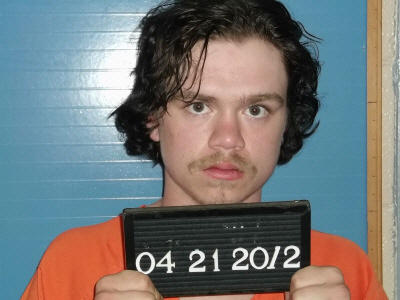 ALEXANDER CAMPBELL
Cannon County Sheriff’s Deputy Jordan McGee was dispatched to an auto accident on McMinnville Hwy. on April 21. Upon arrival he found a 2001 Ford Taurus in a ditch with no driver inside or outside the vehicle.

Cannon County Dispatch informed Deputy McGee a man had picked up the driver and taken him to Woodbury. The driver was reported to be wearing a purple hoodie and he had a pieced lip.

Woodbury Police units looked for the driver but were unable to make contact.

The keys were missing from the vehicle. On the driver’s side floorboard was located what appeared to be a pipe commonly used for smoking marijuana.

Woodbury Auto Express was contacted to tow the vehicle to its lot.

On his way to the sheriff’s department to do his report of the incident, Deputy McGee noticed a man sitting in the parking out of O’Reilly Auto Parts who was wearing a purple jacket.

Deputy McGee pulled into the parking lot and spoke with the individual, Alexander Bradley Campbell, 19, 104 Burger Dr., Manchester, who stated he was waiting for his mother to pick him up.

Deputy McGee contacted Deputy Reed Bryson and told him he had located a male matching the description of the driver of the Ford Taurus.

When asked for identification, Campbell rambled through his pockets and produced some keys, a flashlight pen and a wallet. When asked what the keys went to Campbell said he didn’t know and that he had found them in the parking lot at Walmart in Tullahoma.

The keys were to a Ford and had a remote attached. Woodbury Auto Express was contacted. The remote unlocked the doors and the key fit the ignition of the vehicle.

Campbell said he had not been driving the vehicle and that he had never seen it before it pulled up. While in the process of getting ready to place Campbell into the back of his patrol unit, Deputy McGee observed another pipe sitting beside him that had a strong odor consistent with the smell of burnt marijuana. Campbell said it was there when he showed up and denied it was his.

Campbell was placed under arrest for Leaving the Scene of an Accident, Driving Without a License, Filing a False Report and Possession of Drug Paraphernalia. Upon contact with the owner of the vehicle, she said it had been stolen. An additional charge of Theft Over $1,000 was levied.

Total bond was set at $10,750. Campbell was appointed an attorney in Cannon County General Sessions Court on April 24. His next court appearance is set for May 15.