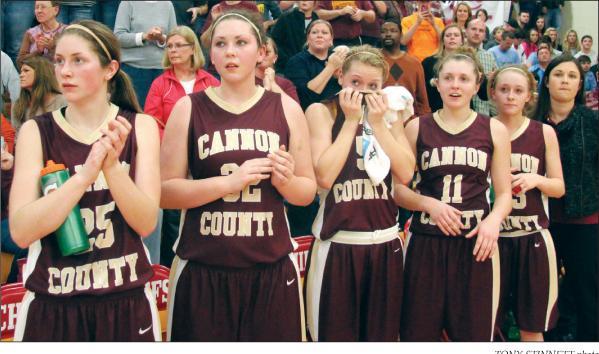 Cannon County will be making the program's 12th appearance in the state tournament when it faces Fulton in the TSSAA Class AA state quarterfinals at MTSU's Murphy Center Thursday (March 6) at 4:30 p.m.

Getting back to the state tournament was a mission for a team that felt it had something to prove.

"It feels great to be going back to the state tournament," said MTSU signee Abbey Sissom, who is also a Class AA Miss Basketball finalist. "I can speak for the whole team when I say we have a lot of regrets from last year with the way we played. We have some unfinished business."

Stage fright should not be a problem for the No. 2-ranked Lionettes (33-4), who are making the school's third state tournament appearance in four years and second straight. The current run is the second best in program history. The only other time Cannon County appeared in consecutive state tournaments was the late 1980s when it went three straight times - 1987-89.

Fulton (28-5), on the other hand, will be making the school's first appearance in the event.

"It is a team coming for the first time ever and that's a tough position," Cannon County Head Coach Michael Dodgen said. "I've been there and you do have jitters."

Tradition is one thing but the fact Cannon County has had a team in the state tournament in all but one decade since the 1950s probably does little to help the Lionettes on the court in 2014.

"I believe that helps tremendously," Dodgen said. "Your leadership has to step up at this point. Most of these girls have been in that environment and atmosphere and played in it. They know what to expect a year later and that could make a difference."

Cannon County is the highest-ranked Class AA team in the field at No. 2 because Fulton eliminated No. 1 Grainger, 57-55, to reach its first state tournament. Fulton was ranked No. 8 in the final Associated Press Class AA Top 10.