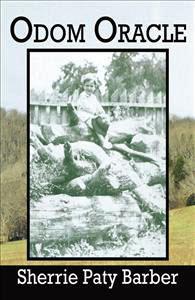 The background is of Fodder Stack Knob in Cannon County taken by Danny Nichols of Cannon County. The little boy is the author's father, Jim Paty, cira 1918 in Rutherford County.
Odom Oracle chronicles six generations of the James W. and Mary Crisp Odom family from 1811-1925. By James’ death in 1843 a family dynasty had been formed in Middle Tennessee.

Among the second generation, Franklin Odom, who owned over 2000 acres of land, more than 90 horses and 75 slaves, fought beside his six sons for the Confederacy. By war’s end Franklin had five sons, no horses and land overrun by carpetbaggers.

War’s devastation uprooted numerous Odom families moving them from Tennessee towards Texas and beyond This is the Middle Tennessee Odom story.

“Odom Oracle is the accumulation of over 50 years of research from my father, James “Jim” Paty," says the book's author, Sherrie Paty Barber.

"Dad, who is now a hale and hearty 93, began his quest to know from whence he came back in the middle 1930’s. He continued stock piling books, letters, documents, pictures and notes until about 10 years ago when finally turned it all over to me.

"It has taken me years of sorting, double checking and organizing to finally pull all together ... and to make connect with some major sources that expanded sparse areas in the research," Barber said "Cannon County itself figures large in the genealogical research since many of the Odom family members lived and died there."

You can visit the web site: http://www.buybooksontheweb.com/default.aspx Please type Odom Oracle in the search box at the page top. It will take you to the book and reviews that have been written. There are over 3000 names in the index. The index itself can be viewed at: http://www.usgennet.org/usa/tn/county/cannon/

Simply go to the middle of the page and click on Odom Oracle index.