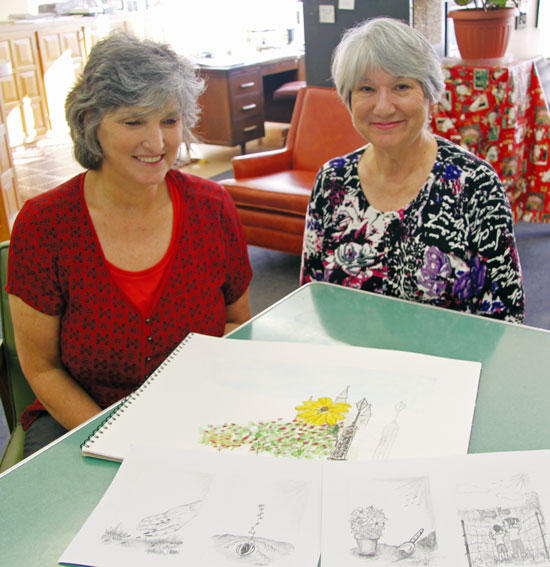 Fran Gervais, a Louisiana native, has authored the book with illustration from her sister, Woodbury resident Barbara Manix, in hopes of reaching out to those who may have lost family, or reunited with them, through the years.

The story is based on the childhood memories of one girl who struggles with her identity and purpose in a large New Orleans family. Though rich in heritage, the family falls on hard times and relies heavily on financial assistance from other family members. Her parents are deficient in meeting the needs of their children so the girl then seeks comfort and nurturing from her extended family.

Gervais began writing the book in order to bring to life some of her childhood memories for a child she had to give up for adoption at a young age.

"I had reunited with a child I had given up for adoption many years ago," Gervais said. "She contacted me and we have become good friends. I had no choice but to give her up at the time, but now I am so happy that she's in my life. I wrote the book about my childhood so she would know something about me growing up. I wanted to provide insight to what makes her tick because she's a lot like me."

The story begins with the trauma Gervais suffered that led to a pregnancy. It takes the reader through some of Gervais' hardships as a child and ends with her survival through those hardships.

"I believe if someone reads my memories I want them to see that no matter how much life troubles you along the way, reach out and grab hold of something, and you can get what you want out of life without hurting others," Gervais said.

Gervais' experience of authoring her first book is accentuated by her sister's involvement. Manix is an artist who spent a great deal of time doing paintings on Jackson Square while living in New Orleans. That passion had been put on the back-burner following her move to Woodbury; however, the book provided not only an opportunity to doing art again, but also working with her sister as the illustrator for "Black-eyed Susan Among The Roses - A New Orleans Memoir."

Manix is responsible for the cover and other illustrations throughout the book.

"It has been an absolute joy," Manix said. "It has always been on my bucket list to illustrate a book. Not only am I fulfilling an item on my bucket list, but my sister is the author and that's great. I'm really excited, and I'm very proud of her. I read the book and it's wonderful. It's a work of art."

Gervais said the book also displays her sister's many talents.

"(Barbara) is one of my youngest sisters and I'm so proud of her for going through school and getting a degree in graphic art," Gervais said. "She put that aside for so long. She used to do the most beautiful paintings on Jackson Square (in New Orleans). I needed her help because I wanted her to show what she can do, plus I wanted her to be part of my story. Maybe this will revive her art career."

Following is an excerpt:

"As I walked the six blocks along the beach with two large sacks stuffed with my belongings, I soberly began to reflect on my past several years. I reached down and plucked a bunch of Black-Eyed Susan from the side of the road at the edge of an empty lot overlooking the bay. I was home."

"Black-Eyed Susan Among The Roses - A New Orleans Memoir," will be available on Amazon.com just in time for Christmas.