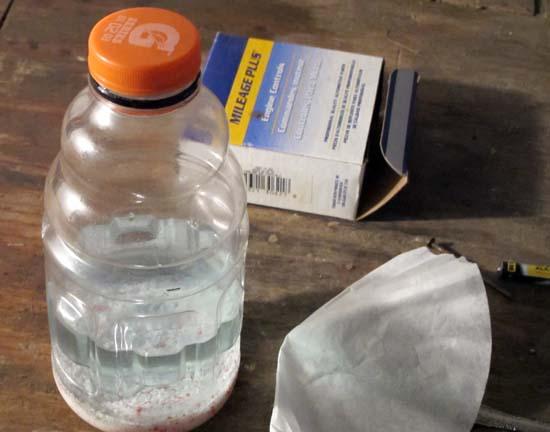 These items used for making meth were found inside of a shed on Manustown Road this week.

A Woodbury man was arrested on charges of manufacturing methamphetamine this week. More arrests are expected in the case.

According to Cannon County Sheriff’s Investigator Anthony Young, Sheriff Darrell Young received information a wanted suspect was at the home at 957 Manustown Road, and that a meth-making operation was also being run there.

Sheriff Young, Investigator Young and Deputy Eric Moss went to the house in search of the wanted suspect.

“Upon arrival, we could see a shed with a light on inside at the back of the property,” Investigator Young said. “Deputy Moss observed persons run from the shed. When we went to the shed we found an active meth lab. They (suspects) were in the process of making it. They were cooking it inside the shed when we drove up.”

Following a foot chase through a field and swamp, one of the suspects was apprehended.

Investigator Young said additional suspects are being sought in connection with the case.