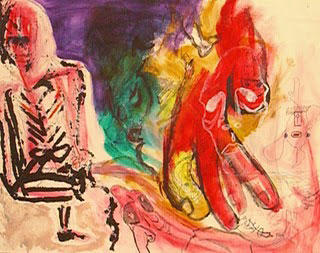 The Paintings of Carl David Sokol Morris, whose body of work helps explore and give weight to the experience of living with Schizophrenia will be on display now through June 19th in the Marly Berger Gallery at The Arts Center of Cannon County in Woodbury, Tennessee.

Carl David Sokol Morris didn’t live an extended, full life. At age seventeen he was diagnosed with schizophrenia. He was medicated to varying degrees of success, and spent short periods in psychiatric hospitals. His personal demons finally took their toll at age twenty six when Carl Morris took his own life. By age twenty six Carl had amassed a collection of nearly 400 deeply personal paintings, completed on artist boards, canvasses, and any other materials he made available. He lived mostly with his parents, Robert and Jeanne Morris, in the home his father was raised, in Medina, Tennessee. Roughly the last third of his life, Carl Morris wrestled with an illness that affects nearly 1% of the world’s population.  Schizophrenia is often diagnosed in young adults either in their teens or early 20s. According to many who knew him, Carl was warm, giving, and caring if reclusive, guarded and quiet.

What Carl did with his short time was to create jarring, deeply personal images that drew from his deep faith, his inherited artistic talent, and his daily challenges to create a visual diary of work suggesting his personal struggle with schizophrenia. Most of his drawings are not dated; his disjointed style and his willingness to experiment with color, texture and media suggest an evolution of his talent, and well as the progress of his illness. Carl was a daring painter (also a committed essayist who logged over 400 pages in personal journals) who moved beyond his modest training and willingly explored and displayed a darkness that confronts his viewers. He drew encouragement from his teachers, but Carl's artistic journey appears to be all his own. Carl Morris was prolific, but brave in his willingness to look deep into his soul. The Marly Berger Gallery at the Arts Center of Cannon County is proud to present the work of an incredibly talented Tennessee artist who stopped his career all too early. These are not comforting images, but viewers can be rewarded by looking deeply, and spending time with these works. Works (when priced) can be purchased at the show's end, and proceeds will go to a fund to benefit Morris' daughter, Star Cheyenne.  Morris’ paintings will be on display in The Marly Berger Gallery until June 19, 2011.

According to the organization, MHA, Mental Health America, http://www.mentalhealthamerica.net, May 2011 is Mental Health Month. Begun originally in 1949, Mental Health Month helps promote mental wellness for all and raises awareness of mental health conditions affecting citizens around the world. During the month of May and June 2011, the Arts Center of Cannon County’s Marly Berger Gallery is hosting two exhibits that call attention to the importance of Mental Health in everyday life.

Admission to this exhibit is free and open to the public. The Marly Berger Gallery located in The Arts Center of Cannon County is open 10 a.m.-4:00 p.m. Monday through Saturday. The Arts Center is located on 1424 John Bragg Highway, just west of the town of Woodbury, approximately 20 minutes from Murfreesboro, Manchester, and McMinnville and one hour southeast of Nashville.  Office hours are 10:00AM to 4:00PM, Monday through Saturday.  For more information pleased call 615-563-2787 or 1-800-235-9073.

What: The Paintings of Carl Morris