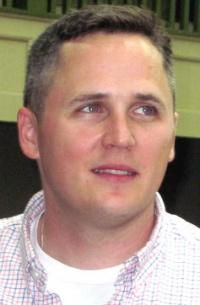 LEMING
Congressional candidate Ben Leming, a Marine Captain and Iraq War combat helicopter veteran, will hold a rally on the square in Woodbury on Monday July 5th at 6:00pm.

There will be free food and live music. Everyone in the community is invited.

Other candidates for state and local offices will be on hand as well.

Murfreesboro native Ben Leming, is a graduate of the United States Naval Academy. He is a Democrat running for the seat being vacated by retiring Congressman Bart Gordon in Tennessee’s 6th Congressional District.

Print
Members Opinions:
CannonCourier
[Delete]
The "half-truths and misstatements" that could hinder the chances of Leming and other Democrats aren't coming from Republicans. They're coming directly out of the mouth of the president:

"The Health Care Package will pay for itself"

"We shouldn’t Mandate the purchase of health care"

"We have run out of places in the US to drill for oil."

"Recovery Act will save or create jobs"

"Unemployment rate will be 8.5% without stimulus."

"Guantanamo bay to be closed within a year"

"Would have the most transparent administration in History"

"Tougher rules against revolving door for lobbyists and former officials"

"Pay for the national service plan without increasing the deficit"

CannonCourier
[Delete]
Well since they are all statements made by Obama, it is probably all three.
JohnnyRingo
[Delete]
So what are you saying Jack, that GWB was so much smarter that all the Democrats in Congress that he tricked them into voting for the Iraq War resolution and just about everything else on his agenda?

For Gordon's replacement every candidate has to be considered on their own merits. Tracy and Zelenik have published positions on several issues. Leming has been tight lipped on the issues. I do personally agree with his press release on the Mosque in Murfreesboro, but his press release on the BP oil spill was nothing but political pandering throwing out a bunch of catch phrases.

I would encourage every one to personally attend Ben's event and ask very specific questions about the issues that are important to you. Pin him down, make him take a position and don't accept the same catch phrases you hear from every politician. Ask him about Obamacare and the fact that it raises spending, costs, and the budget deficit. If you think Obamacare is great then find out if he agrees with you and why. Don't accept some sound byte about secure borders on immigration, find out if he supports mandatory use of E-Verify by employers or if he supports giving illegal immigrants citizenship, or just allowing a permanent resident worker status with no citizenship. Find out how he fells about cap and trade and ethanol subsidies.

Do the same with all the candidates, don't take Joe the Plumber's word for it.

CannonCourier
[Delete]
Did you ever stop to think you might be considered a radical Jack?
Leatherneck
[Delete]
I met Ben Leming at the Woodbury fireworks Friday evening. A former Marine and thankful Patriot myself, I was hopeful that a fellow Marine running for office on the "Liberal" side of the isle (D) was seeking to bring the Democratic Party back closer to the center of politics from it's current far-left socialistic positions and policies.

I asked about his position regarding the far leftist agenda of Pelosi, Reid, Barney
Franks and President Obama, he rubber stamped and defended their political posture and positions.

When I asked Ben Leming about the "don't ask, don't tell" being overturned and forced upon our Nation's Service Men & Women by this very Liberal group of politicians, Ben Leming defended this as well. He favors having openly gay people serving in America's Military. I spoke of how this deviant, unnatural and (many God honoring citizens feel is immoral) lifestyle choice, is being forced upon our Nation, our Military by the Liberal-Leftist Obama administration and like minded politicians. Leming fully supports this position and said "they are currently serving now and are having to lie about it". I expressed my concern that when these people are in positions of rank and leadership command structure, they will not just be out of the closet, they would be in your face, forcing subordinates to embrace the gay agenda. He dismissed this too. I asked about his children being exposed to the teaching, normalizing and indoctrination of these deviant lifestyles & more is seeping into school curriculum, he dismissed this as not yet occurring in Rutherford County. Not yet?

I asked if he was pro-life or pro-abortion. Ben Leming stated "it was a woman's choice what to do with her body". He stated the government should not be deciding what she can or cannot do with her body. Clearly pro-abortion/pro-death. I shared with him that in fact, the baby being killed in abortions, was a different body, often with completely different blood types and DNA. These defenseless babies cannot speak or defend themselves from hypocrites and killers. I asked if women were also free with their bodies to consume illegal drugs, or live and work as prostitutes with "their bodies" ? He ended the conversation as being irreconcilable. He did not wish to continue with the questions I had for him. On this point alone, Ben Leming was correct. Some things in life are NOT supposed to be compromised or surrendered. When Truth is compromised, judgment will follow.

Our Nation is so divided these days largely because those who follow and desire to live the teachings of Jesus, will forever be at odds with those who choose to rebel & object to them.

Corrupt Policies have taken prayer out of the classroom, yet made place for metal detectors and condoms. Schools Systems choose to advance the teachings of Darwin over the Truth of God.

On the matter of the MOSQUE topic in Murfreesboro ( Fri, Jun 18, 2010 press release), He reveals his ignorance about teachings of Islam. It is more than a “religion” or a faith to be practiced. Are there other religions that teach to kill, those who would convert from it’s teachings? Are there any Muslum or Islamic Nations or Republics that allow the peaceful teachings of Christianity or the building of Christian churches on their soil?
“Core tenets of Islam are irreconcilably in conflict with the United States Constitution, identified in part as infringements upon freedom of religion and expression, lack of equality among people and between the sexes, and sanctioned deception in dealing with non-Muslims; these precepts constitute a breach of inalienable human rights”
(http://www.islam-watch.org/Etc/Sharia-Islam-Threat-to-America.htm)

Bottom line- if you support the Liberal-leftist agenda, Leming may be your man. However, if you are a Christian Conservative with a Biblical Worldview, there aren't too many Democrats to choose from.