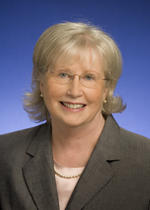 Beavers said she was urged by constituents in the Senate district to remain in the Tennessee General Assembly.

"I will be a candidate for my Senate seat again for District 17," Beavers said.

State Rep. Susan Lynn of Mt. Juliet is already running for the seat that represents all of Cannon, Clay, DeKalb, Macon and Smith counties, and parts of Sumner, Trousdale and Wilson counties.

Lynn (R-Mount Juliet) has filed her completed petition to run and has been campaigning for the 17th Senate District seat for nearly a year.

Senator Mae Beavers, surrounded by her Senate colleagues, announced today that she is running for another term for the State Senate seat representing Wilson, Cannon, Clay, DeKalb, Macon, Smith, Sumner, and Trousdale counties. The decision came after much deliberation and prayerful consideration.

There had been discussion that Senator Beavers could possibly be running for the Wilson County Mayor position; however, at the insistence of many colleagues and a multitude of constituents, Beavers has declared her desire to continue her work in serving the people of the 17th District.

“This decision is based upon my desire to serve the state,” Beavers stated. “I’m proud of what we have been able to accomplish in the state legislature in the past eight years, and I’m looking forward to what we can accomplish in the next four years, especially if we have a Republican Governor and Republican majorities in both the House and Senate. My work here is not done.”

Senator Beavers has a Bachelor of Science degree from Trevecca Nazarene University. She has worked as a court reporter and paralegal before being elected to the county commission, and more recently worked as a financial advisor. In the Tennessee Legislature she was a leader in the fight to stop the passage of a state income tax. Since being elected to State Senate, she has taken a leadership role, serving the past two sessions as the Chair of the Senate Judiciary Committee.