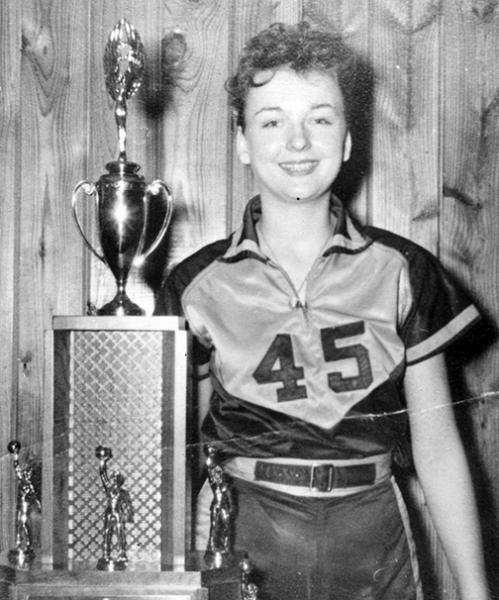 All Gloria (Parker) Stewart wanted to be as a youngster growing up in the Hollow Springs community was a basketball player.

Stewart not only became a basketball player, but she also developed into one of the best ever to play the game in Cannon County.

When Gloria (Parker) Stewart graduated from Woodbury Central in 1958 only one player in Cannon County history had scored more than her 1,625 points and that was teammate and classmate Helen (Hayes) Davenport with 1,933.
Davenport, who was inducted into the Cannon Courier Sports Hall of Fame in 2013, will serve as Stewart's presenter when the dynamic former standout is inducted into the same hall of fame next month.

Stewart, the daughter of Alex and Opal Parker, will be joined at her table by teammates Davenport, Joy (Gilley) Spain and Annette Lorance, and Coach Robert A. Harris when she becomes one of six individuals enshrined into the Cannon Courier Sports Hall of Fame at the Arts Center of Cannon County, May 15, at 6:30 p.m. Doors open at 6.

Stewart wouldn't have it any other way.

Team always came first for the former standout who helped lead Woodbury Central to its first state tournament appearance in 1958.

"I think the relationships with the players are what stand out to me," Stewart said. "We have stayed in touch through all these years. Deloris Holt and Florence Adams died. We will have four others from our 1958 team at the table. It means so much to me that we can share this together."

Stewart says Spain and Lorance should also be in the Hall of Fame.

That's how she was as a player.

"Gloria always put others first," said Harris, the former Woodbury Central and Cannon County Head Coach who is also a member of the Cannon Courier Sports Hall of Fame. "Those girls were the first bunch I coached at Woodbury Central. They were outstanding. In the three years I coached them we won 71 games and lost just 11.

"Gloria could score anytime you needed her too. It was just that simple. She was just that type of player, but Gloria didn't care who scored or who did what. She just wanted to win."
Stewart, whose daughter Beth (Stewart) Stark, also will be inducted this year, says her love for basketball and team inspired her to work harder and be a better player.

"Basketball was the very best time of my life," Stewart said. "I loved the competitiveness and the strategy. The best thing was winning, and we won a lot. When I was informed that I was going into the Hall of Fame I just thought about what a great team we had. We were good, really good. We didn't have districts and regions then. It was all one class. When we went to state it was THE state. I have such fantastic memories.

"I think of my teammates and those great teams and coaches because without them none of it would have happened."

Stewart said she was unaware of her career point total until just recently when it was published in the Cannon Courier. Her 1,625 points are still seventh on the career scoring list. Four of the six in front of her are in the Cannon Courier Sports Hall of Fame. The other two (Emily Sissom and Abbey Sissom) are not yet eligible.

"I didn't know that I had scored as many points as I did," Stewart said. "We never looked. We never knew. We never asked. I don't think we cared. We just wanted to win, and we won."

Harris said the winning attitude is what made coaching his first team so enjoyable.

Stewart had the skills and talent to play beyond high school. She was offered an opportunity to play for Nashville Business College after high school. Stewart would have teamed with the great Nera White.

Her father, Alex, had other ideas.

"My first trip would have been to Russia and Australia," Stewart recalls. "I was just 17 so dad would not let me play. I told him I would go anyway. He said he would come get me, and I knew he would so I couldn't do that."

"Someone wanted me and thought I was good enough to play so that was a good feeling," Stewart said. "My self-esteem was there because I knew I could have gone and could have played. I love the game and still do. I love everything about it."

Beth Stewart only heard stories of her mother's greatness as a prep standout; however, she said her mom clearly still had skills later in life.

"I have very vivid memories of her being a very good PTO player," Beth shared. "The PTO groups would play, and I saw mom play in that. She was very, very good."

Beth says her mother's induction into the Hall of Fame is most deserving.

"She did a lot of great things for her teams at Woodbury Central," Beth said. "I grew up with everybody telling me how great she was and how they enjoyed watching her play. That was a constant in my life. Mom grew up a poor farmer's daughter. Basketball was her thing. It was what she wanted to do. Mom has encouraged a lot of kids to play sports through the years. She has worked magic in the community to get them to play."

So is achieving goals.

Gloria grew up aspiring to be a basketball player.

Not only did Gloria (Parker) Stewart achieve her goal by becoming a Cannon County sports icon, but she also has inspired others to allow sports to open doors - and opportunities - for them.