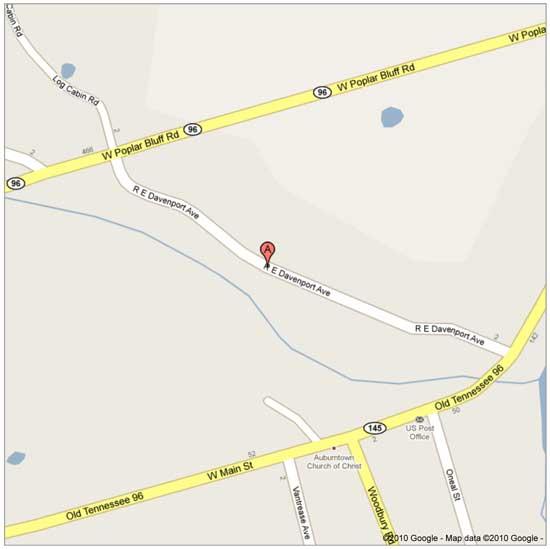 A Google map of the area where Friday's incident was reported to have occurred.
According to a source with direct knowledge of the situation, Cannon County Administrator of Elections Stanley Dobson suffered serious injuries Friday night while trying to offer assistance to two friends.

One of the friends is Tom Ganoe, a candidate for Second District Constable, and the other is a domestic violence victim who was seeking assistance, the source, who requested anonymity, said.

During the incident, which occurred in Auburntown on R E Davenport Ave., Dobson was reported to have been knocked to the ground and while there, was hit by a truck, the source said.

Dobson was life-flighted to Vanderbilt Hospital following the altercation. He was released early this morning.

"He has multiple bruises and injuries to his back, left shoulder, arms and a bruised chest cavity," the source said. "He has no broken bones."

Ganon also suffered injuries during the event, the source said.

"They (Dobson and Ganoe) were just innocent victims trying to help someone out. It was a very frightening situation," the source related.

The source reported Dobson wanted to assure Cannon County residents that the Election Office will remain open for business and will be in capable hands while he is recovering. Dorinda Mankin serves as Dobson's assistance administrator.

Cannon County Administrator of Elections Stanley Dobson is back at home today resting and recovering from injuries sustained in a reported altercation Friday evening in Auburntown.

Matt Studd, a Cannon County election commissioner, said this morning that Dobson had been released from Vanderbilt Hospital at around 2 a.m. Dobson was airlifted to the hospital following the incident.

Studd said he spoke with Dobson's wife, Janice, who reported her husband was resting comfortably and that while he sustained multiple bruises, he suffered no broken bones.

"Janice told me he's banged up and bruised but otherwise he's OK," Studd said. "He should be OK and back at work after a few days of rest and recovery."

This is the second time in the past few months Dobson has sustained injuries in an incident. He was involved in a traffic accident on Auburntown Road in March.

Deputy Andy Bryson, public information officer for the Cannon County Sheriff's Department, said this morning the department was still investigating the altercation and that a report would be available Monday.

The next election in Cannon County is the General Election on August 5.

Print
Members Opinions:
Straitupmarilyn
[Delete]
We will continue to lift everyone up in prayer....