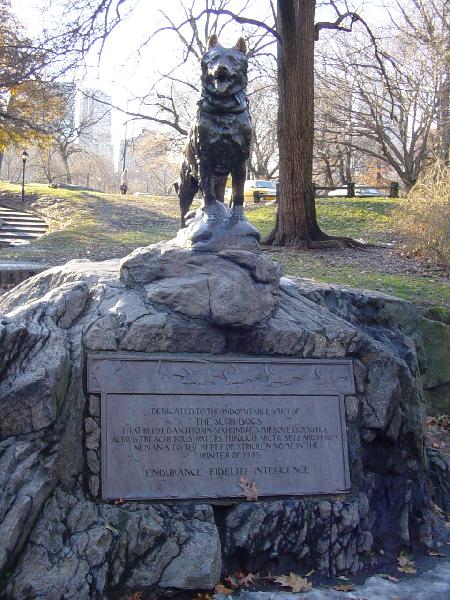 The glowing bronze of this statue on a rock outcropping near the East Drive at 67th Street in NYC's Central Park reflects the loving pats of countless children and adults who recall the story of a heroic dog. In January 1925, the city of Nome, Alaska experienced an outbreak of diphtheria.

A relay of mushers and their dog-sled teams was the only way to deliver the fur-wrapped twenty-pound package of serum to the ailing community 674 miles from Nenana. The route followed the old Iditarod Trail used by mail drivers from Anchorage to Nome (now the route of the dog-sled championships). The 20 teams of over 200 dogs covered the frozen terrain at about six miles per hour, in blizzard conditions with temperatures of 50 degrees below zero.

The last musher, Gunnar Kasson, and his team lead by Balto, a black and white Alaskan malamute, raced over the frozen tundra in only five days and seven hours - a world record time.

Balto survived the journey, and toured the United States with the rest of the dog team. On December 17, 1925, 10 months after his arrival in Nome, Balto was present as this bronze statue was unveiled in Central Park.

Balto died in 1933 in Cleveland, Ohio, where his stuffed body is on display at Cleveland's Natural History Museum.