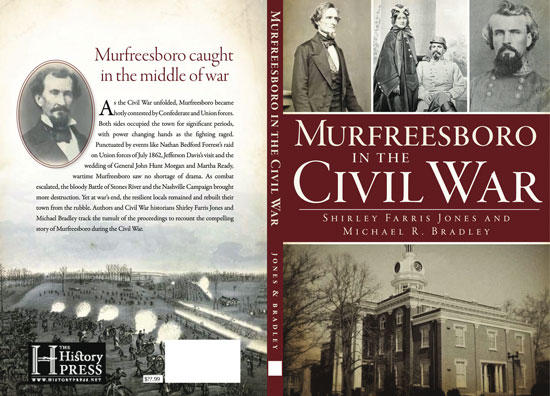 The pretty little town of Murfreesboro was barely 50 years old when it became a focal point of the Civil War in the West.  From 1811, when the town was founded, until 1861, life had been interesting but hardly dramatic.

But, things were about to change.

From the moment residents raised the Confederate flag over the Rutherford County Courthouse, preparations for war began almost immediately.

Companies of soldiers were raised and accepted into service as members of the Provisional Army of Tennessee. The manufacturing of arms began along with preparations for caring for the sick and wounded.

But all of this was done with the idea of a short-term involvement. Very few, if any of Murfreesboro’s residents, ever dreamed that the war would drag on for four long years.

Nor did they realize that both Confederate and Union forces would hotly contest the town, with both sides occupying the area for lengthy periods of time when power changed hands after hard-fought battles waged in front of their own eyes.

Public buildings, as well as private homes, were turned into hospitals, and thousands of bodies were buried within the town limits. Fortunes were lost and lives were forever changed.

Life was uncertain and relationships were in a fast forward mode, tradition put aside by necessity. The African-American population, almost all of them slaves, waited to see how the war would affect their status.

Murfreesboro’s own Southern belle Martha Ready became engaged to the “Thunderbolt of the Confederacy,” John Hunt Morgan, after a three-week courtship.

And, two other sisters, Corine and Josephine Reeves, became engaged to Union officers just about as quickly. When the Confederate army left Murfreesboro in March of 1862, Union forces arrived, bringing with it two men who shared similar philosophies of harsh treatment for those whose loyalty remained with the South: Col. John G. Parkhurst, a commanding officer of the 9th Michigan Infantry, and his assistant provost marshal, Capt. Oliver Cromwell Rounds, of the same regiment.

These two officers, who residents despised, were betrothed to two of Murfreesboro’s own, the daughters of Nathan B. Reeves.

When Confederate Gen. Nathan Bedford Forrest retook the town on July 13, 1862, Rounds was found hiding between the featherbeds of his fiancé, Corine Reeves. He was sent off to prison and later sent a letter to her, apparently breaking the engagement, and never returned to Murfreesboro.

Parkhurst was also captured but returned after the Civil War. In 1868, he married Josephine Reeves.  She died three years later in Nashville. And, with Murfreesboro once again under Confederate rule, the stage was set for the social highlight of the decade, namely, the visit of Jefferson Davis, who served as president of the Confederacy, and the wedding of Martha Ready Morgan and Gen. John Hunt Morgan on Dec. 14, 1862.

Two weeks later it was all a wonderful dream.

Murfreesboro was once again under Union rule and would remain so for the duration of the war. As the dream ended, a nightmare began for the town and citizens.

By 1863, everything was in short supply, and residents watched as the Confederate Army withdrew, feeling they were doomed. The hospital scenes were horrific, never to-be forgotten images of blood, guts, and gore.

Residents watched as the Union disrespected property rights, cut down trees, destroyed fences, and literally ripped off boards from houses and out-buildings to provide the necessary lumber to build Fortress Rosecrans.

Even the Presbyterian Church was destroyed.

Nothing was sacred or safe from the enemy.

Former Confederate soldier Calvin Lowe, at home and still recovering from wounds received at the Battle of Shiloh, watched in horror as his wife, who was seven months pregnant, was stabbed in the stomach by Union soldiers who were stealing their chickens and apples.

Blood and fire seemed to be the order of the day in 1864 as Maj. Gen. Robert Milroy issued official orders for the arrest and execution without trial of more than 500 Rutherford County residents.

Inhumane acts of torture such as what befell DeWitt Smith Jobe were simply not recorded in Union records.

But there was renewed hope, if only brief, as Confederate Gen. John Bell Hood and Forrest returned to the area with Confederate soldiers.

Fifteen-year-old Frances Elizabeth Henderson recorded in her diary that when Forrest visited her home, “I had the honor of mending his pants.”

Five months later, the Civil War was finally over.

But the town to which they returned was not the home they had left.

A program will be presented by the authors prior to the event, and books will be available for purchase at that time.