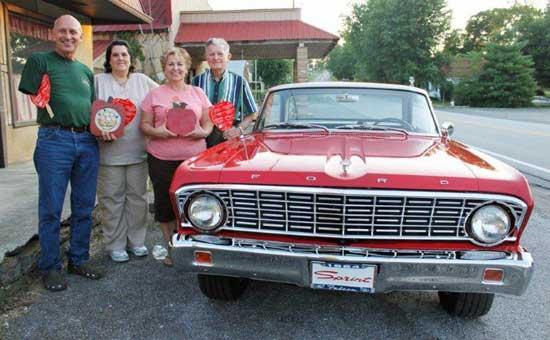 Red apples, the start of the school year and Auburntown, Tennessee just seem to go together. Perhaps that is because the Auburntown Red Apple Days celebration has been held on the first Saturday of August for the past thirty-three years.

The first Auburntown celebration was held in 1976, sponsored by the Bank of Commerce in Woodbury and billed as “Tom Bell Day.” Mr. Bell was retiring after forty-three years as president of the Bank of Auburn, built in 1922. The celebration was so successful, an annual event was established and the name changed to Red Apple Days.

Current mayor of Auburntown, Roger Turney, reported Red Apple Days was held in the bank parking lot until the City of Auburntown purchased land in 1986 to create the C.S. Hawkins Park. The addition of the C.E. Hancock Cabin in 1994 established a permanent park stage for events including Red Apple Days.

The 5 K Run first held in 1981, starts Saturday morning, August 7th at 7:00 AM. Auburntown Lions’ Club Fish and Shrimp Fry will be served all day on Saturday. Children’s games, volleyball and corn hole tournaments, a womanless beauty pageant, and watermelon spitting contest are just a few of Saturday’s activities.

Additionally, Woodbury Police Department will sponsor a child safety seat inspection and the Auburntown Fire Department will provide a dunking booth. On stage for Saturday afternoon and evening will be square dancers and country music bands.

Red Apple Days parade begins at noon on Saturday at the Wilson/Cannon County line. It will continue along Popular Bluff Road on Highway 96 and on Main Street through Auburntown.

Country music artist Jackson Delaney of Nashville is the parade Grand Marshal and will perform later on Saturday. Parade Co-marshals, Roger Turney and Melinda Crook, will be riding in Mr. Turney’s 1964 Ford Falcon.

Mr. Turney is the retiring Auburn School principal and Ms. Crook has been appointed as the new principal. Ms. Crook smiled and said that she is preparing some “cute” parade outfits for them both.

Over thirty vendors will be stationed along the park track including a photographer making Red Apple Day portraits. Back by popular demand is the Red Apple Days t-shirt, along with a variety of foods, crafts, and memorabilia. Everyone is welcome and encouraged to grab a lawn chair and join Auburntown folks for this year’s Red Apple Days celebration August 6th and 7th.

Print
Members Opinions:
toddh
[Delete]
The best town in Tennessee shines this time of year. Everyone come out and enjoy one of the BEST weekends in the state!!!