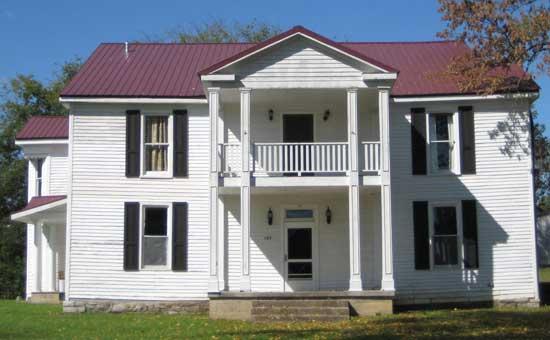 The Auburntown Historical Society’s July 21 meeting will be held at Auburntown’s most historically significant home beginning at 7 p.m.

Most anyone who has grown up in Auburntown is familiar with the big, white two-story house that sits directly on Main Street on the banks of Marshall Creek, but few know the immense history of the house.

The McKnight House was built in 1857 by John F. Weedon who owned most of the property that Auburntown sits on today. Mr. Weedon moved to Auburntown from Woodbury where the very prominent Weedon family had settled. They were instrumental in the establishment of the Woodbury Baptist Church. He sold off small tracts of land to others who established businesses and thus was instrumental in the creation of the town as it became.

One of the properties became that of the first Auburn School and was located across the street from the present day Church of Christ building. Mr. Weedon and his family lived in the house from 1857-1870. After the War Between the States, many of Auburn’s families relocated to Texas. Among them was the Weedon family.

Dr. Bennett Rucker McKnight and family purchased the property during the 1890s. The McKnight daughters lived in the house until the last one passed away during the 1980s. It was then sold at auction by Guy James, a descendant of the McKnight family. The house has undergone considerable renovations over the years, including the removal of the home’s two-story wrap around porches, extensive structural, plumbing, and electrical upgrades, and continual cosmetic work.

It was the charm and character of a historic house that brought the current owners, Josh and Amanda Davis, to buy the property in September 2010 after driving by and seeing it for sale. Amanda had lived in the house previously and rented it from the previous owners, Travis and Beth Hancock. While living there, she did extensive design work on the house, including repainting all interior rooms with Benjamin Moore Historical Colors, removing dry wall from the ceiling to restore the original wooden paneling, restoring the home’s original fireplace mantels, and modernizing both upstairs bathrooms. Being that Amanda is an interior designer, she knew how to appreciate the craftsmanship and strong character of a historical home and kept true to that character in her designs.

Josh and Amanda said they been amazed at the history contained within the walls and property of the McKnight House. When Amanda is not busy restoring the house, she teaches ZUMBA classes and runs her own interior design firm, Just Design This. Josh is always busy teaching 8th grade science in nearby Wilson County, and together Josh and Amanda own a catering company, Just Imagine That Catering & Events.

Future plans include opening the McKnight House for private rentals to those individuals who wish to hold weddings, parties or family reunions in the house or on the property, including catering by Just Imagine That.

Additional future plans for the McKnight House include an extensive exterior paint job, restoration of the wooden front porch and eventual restoration of the house’s two-story wrap around porches. Josh and Amanda also plan to begin the process of having the home placed on the National Register of Historic Places to preserve a piece of Auburntown history forever. The couple said that they are privileged to own such a prestigious piece of history and are excited as they work to restore their house to its original splendor.

For more information about the Auburntown Historical Society visit www.auburntowntennessee.blogspot.com.

Print
Members Opinions:
[Delete]
Good for them!! I love old houses and this one has always been one of my favorites!! My mother is from Auburntown and she always told us stories about going trick-or-treating at the old house. Of course, to her and her siblings, they always thought it was "spooky." I am so glad to see the Davis' are planning on restoring it to it's former glory, instead of it falling to disrepair. I wish them success on getting it registered!