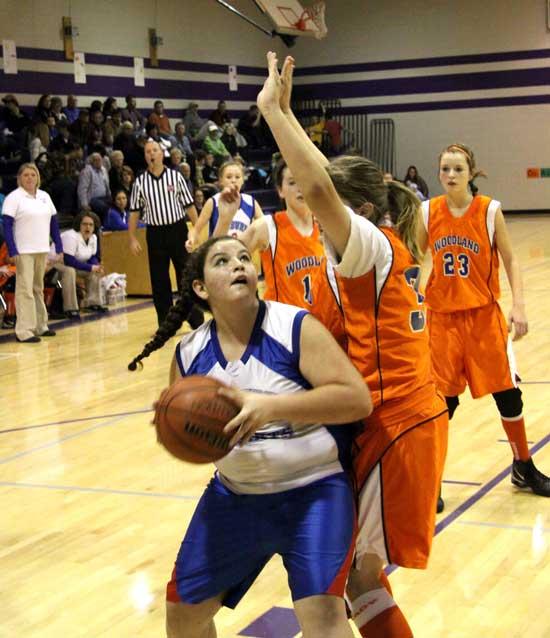 The Knights (13-0) continued to dominate county competition and won their second tournament of the season after capturing the preseason Border Wars Tournament. Erin McReynolds and Kristen McReynolds combined for 34 of their team's points. Cheyenne Fann contributed four in a winning effort.

Woodland was led by Cydney McPeak's seven points, and Ariana Kaliponi finished with four points and five rebounds, but it wasn't enough to challenge a poised Auburn team and its unrelenting defense.

"I was expecting a much closer game so I am well pleased with the girls," Auburn coach Tim Reed said. "This tournament kind of takes you up to Christmas. We have one county game left after Christmas break so this could definitely be a good stepping stone toward the County Tournament."

Auburn appears to become more dominant as the season unfolds. Its smothering defense provided few opportunities for the Lady Warriors, limiting McPeak to just seven points after a 22-point performance against Woodbury Grammar in Thursday's semifinals. The Lady Knights allowed just four first-half field goals and nearly shut Woodland out in the third quarter before surrendering a late field goal.

"I was very impressed with our defense," Erin McReynolds said. "It's the best defense we have played all season. We were switching the screens and talking a lot. The communication was the key."

Woodland (9-3) had upset on the mind early and trailed 6-5 after the first quarter. Auburn turned up the pressure in the second quarter and Erin McReynolds keyed a charge with three steals and subsequent layups.

Kristen McReynolds got into the act with a flurry of baskets and by the time the dust had settled Auburn had collected a 20-9 halftime lead. The Lady Knights removed any lingering doubt with a 13-2 third-quarter run to put the game well in hand.

"It feels amazing to win the tournament," Kristen McReynolds said. "This just motivates us more because we know we have what it takes. Our defense was the difference in this game. We communicated well and that's what it takes."

Woodbury Grammar 26
West Side 18
Kaylee Hayes put together a dynamic individual performance to lead Woodbury Grammar to a 28-16 win against East Side to finish third in the 2010 Cannon County Cancer Tournament Saturday.

Hayes secured a double double with 16 points and 10 rebounds. She connected on three 3-pointers as the Lady Cubs took charge early and broke the game open with a 9-2 third-quarter run. Hailey Peterson scored four points for Woodbury Grammar, and Sarah Hunt had six rebounds.

Print
Members Opinions:
prentice
[Delete]
Good job Lady Knights! We're so proud of you and congratulations to our AT girls, especially ALAYNA Reed. Thanks Tony for a good article on both teams.
cherleader
[Delete]
Wow! What a great night for the Knights and Lady Knights and Cheerleaders. Everyone put it all in and it showed. Thanks to Tony and the Cannon Courier for the great coverage!!!
teacher
[Delete]
All the ladies on the team deserve recognition. They all put forth their best effort. Way to go lady knights!
trishthedish
[Delete]
Way to go Knights and Lady Knights,especially Cheyenne Fann,thats my granddaughter.All of you girls and boys played a great game.As a matter of fact its the best one I have seen in a while.Congratulations to all of you.
[Delete]
Way to go everyone. Was a WONDERFUL set of games for everyone!