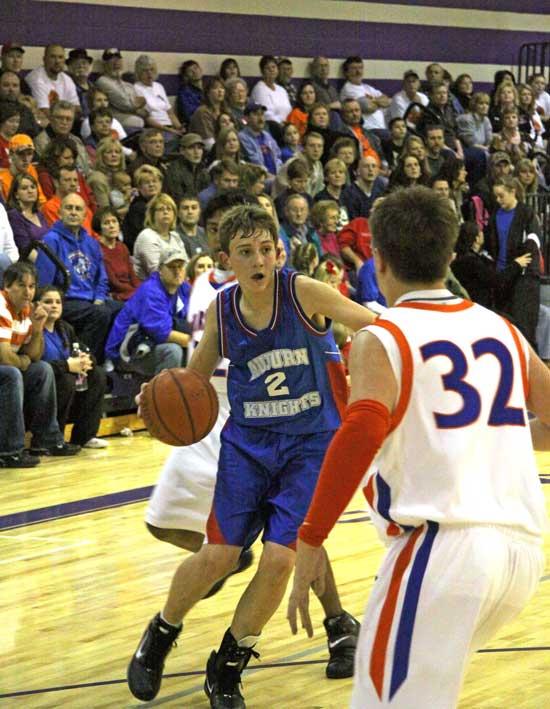 McReynolds' chin  was busted after colliding with a Woodland player going for a loose ball in the first quarter. A dazed McReynolds left the game long enough to cover his chin with a gauze and switch from his bloodied No. 25 jersey to No. 11. The injury would require postgame stitches but it couldn't knock him out of the title bout.

The tough-minded and determined McReynolds poured in a game-high 18 points and yanked eight rebounds to power the Knights to victory and help deal top-seeded Woodland (11-1) its first loss. Auburn (11-2) avenged both of its losses in consecutive tournament games, knocking off West Side in Thursday's semifinals and taking down the Warriors in the championship.

"I would do it again," McReynolds said of getting his chin busted and finishing the game. "I am just very happy we beat Woodland because they are a great team with some great players. We won this tournament as a team and we showed a lot of heart."

Though he did land some of the most painful punches, McReynolds certainly was not a one-man wrecking crew. Briar Jakes capped a strong tournament with 12 points, while Marshall McReynolds and Dalton Gaither added six. Reagan Scott finished with five.

Woodland's balanced attack was led by Jackson Mason's 10 points. Josh Ruehlen (8), A.J. Daniel (7) and Bo Bryson (6) also were chief contributors.
Auburn, the No. 2 seed, came out fighting and Woodland did not seem to know what hit it.  If the championship game had been a prize fight, Auburn delivered the knockout blow in the opening round when it roared to an 18-3 start in the game's first six minutes.

"Woodland is a very good team and we probably shocked them when we got up so quick there at the start," Auburn first-year Head Coach Regan Vaughn said. "We did not start out strong Thursday (against West Side) and that was something we felt we needed to do in this championship game against Woodland. There was no pressure on our boys because we had nothing to lose. We felt confident and went out there and had fun."

There was no feeling-out process as the title match unfolded. Auburn brought the fight to its foe, and Jakes triggered a fast start with a combination of 3-point field goals to distance Auburn early.

"I was getting open early and my teammates were getting me the ball," Jakes said. "I felt confident shooting and it was good to hit those early shots to help the team."

Seldom are games won or lost early and Auburn players knew they still had a battle on their hands even after building the early 15-point cushion.

"When they beat us we pretty much led that whole game and then lost at the end so we knew we had to keep hitting them hard," Garrett McReynolds said. "We couldn't let up. We had to keep the pressure on them."

The Knights managed just one field goal and three second-quarter points, but Woodland couldn't take advantage and narrowly trimmed into the lead with six points to pull to within 21-9 at the half.

The Warriors closed to within 28-18 and were trying to make a run early in the second half but Jakes stepped up with another clutch 3-pointer to push the lead to 31-18. Garrett McReynolds and Scott teamed for back-to-back treys and Auburn had stretched its advantage back to a commanding 39-21 entering the fourth quarter.

"The boys won this tournament last year and they wanted to repeat so this was important to them," Vaughn said. "They worked hard and put two really good games together. They are improving all the time and they showed that this week. I'm proud of all of them. Every single person contributed."

Woodland will not have to wait long for a rematch. The teams play a regular-season game at Woodland Tuesday.

West Side 31
East Side 25
West Side used a 19-point second half to pull away from East Side and take a 31-25 win in the boys consolation game.

The game was tied 12-12 at the half but West Side won the third quarter 13-8 and held on for the win. Jake Burdick led West Side with 10 points, followed by Walker Hatfield with eight. Sam Sissom (5), Jacob Nave (4) and Collin Andeson (4) also helped West Side to the third-place finish.

Jake Hoskins capped a strong tournament with a game-high 13 points. Case Isenhart and Austin Brock each scored four for East Side.