Another Arrest Made In Alleged Underground Marijuana Growing 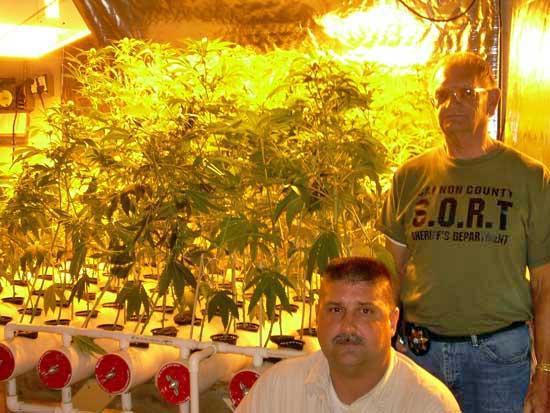 Marilyn Greene, 59, joined her common law husband, Gerry Campbell, after she turned herself in to authorities.

Greene was stopped in Nashville on 22nd Avenue North near Elliston Place on August 24, 2009 when police found ¼ lb of hydro marijuana in her vehicle.

Campbell was arrested late Monday night for allegedly operating a hydroponics marijuana growing operation under his home. Estimated value of the marijuana seized is over 1 million dollars.

Campbell, 52, of 652 Bony Ridge Road, was arrested following a consensual search of his home by the Sheriff's Department and the Tennessee Bureau of Investigation.

Both Campbell and Greene are charged with manufacturing marijuana (over 100 plants), being found in possession of marijuana, and maintaining a dwelling for the purpose of manufacturing drugs.

Sheriff's Detective Captain Charlie Wilder explained that hydroponics is used to grow the marijuana in water instead of soil. "You use water for a media. Sometimes they (growers) will also use artificial soil. It looks like some type of dog food or Coca Puffs on steroids," Wilder said.

An ongoing investigation in Nashville being headed by the TBI led local authorities to Campbell's home, Wilder said.

"(Campbell) gave consent to search and a search was conducted of the property and this pretty elaborate system was found downstairs in the basement. The basement was concealed via a hidden door, a trap door, in the kitchen, it was covered by a big throw rug. Deputy Pat Fann is the officer who found that underground operation. Sheriff (Billy) Nichols along with the TBI assisted in the investigation."

Additionally, Wilder said, the district attorney's office has filed a source motion, which means Campbell and Greene will not be allowed to make bond until they can prove to the court that the money to make the bond is from legitimate sources and not from the sale of narcotics.

He said 8.7 pounds of processed marijuana was taken from the house and sent to the TBI for testing. Also confiscated were digital scales, lights, starters, timers, and underground air conditions.