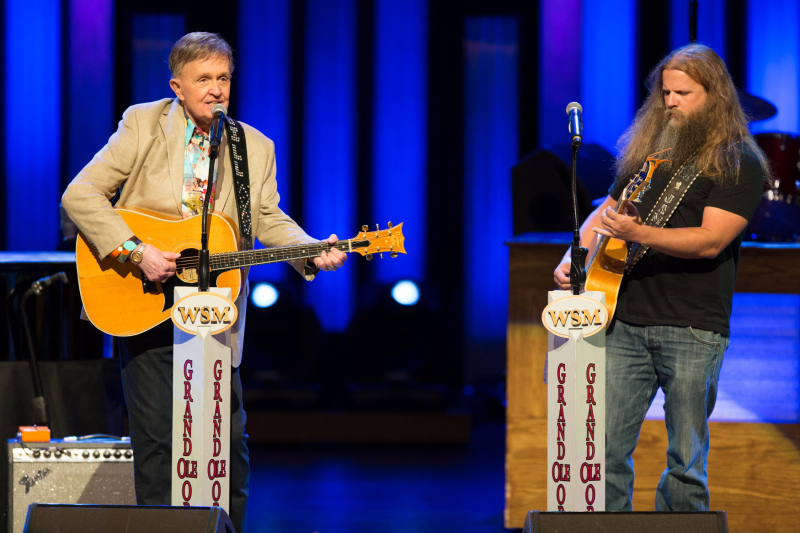 NASHVILLE - It's commonplace for any songwriter to write a song about their past. But when Bill Anderson, Vicky McGehee and Jamey Johnson co-wrote "The Guitar Song," eight years ago, they had no idea they were actually writing it about their future.
The pensive story-song about a fictional guitar that hung unwanted and tattered in an old pawn shop, yet held so many stories of its past to tell, went on to become the title track of Johnson's critically acclaimed fourth album and starts out with the words:

"I'm just a guitar in the pawn shop on the corner
And I'm waiting for someone to play me now and then
My strings are kinda rusty and I'm a little dusty
Oh, but you'd be too if you've been where I've been"

In an eerie and remarkable twist of fate, those lyrics now reflect the true story of a guitar Bill Anderson played when he was first getting started in country music - and on Saturday night, August 8, on the stage of the legendary Grand Ole Opry, the authentic Grammer guitar, given to Anderson personally by Billy Grammer fifty years ago, made its way back into the hands of its original owner.
The story all began four weeks ago when Anderson's secretary received an email from Mike Grauer, the owner of Bell Road Pawn in Phoenix, Arizona, which read that one of the shop's customers had pawned an old guitar which had the words, "This guitar belongs to Bill Anderson," in the sound hole.
Familiar with the 50-year Grand Ole Opry member and his long list of self-penned top country hits like "Whiskey Lullaby," (Brad Paisley, Alison Krauss) "A Lot Of Things Different" (Kenny Chesney), "Give It Away" (George Strait), among others, Grauer searched the Internet and was shocked when he found an old video on YouTube of Anderson playing an identical Grammer guitar on The Johnny Cash Show. Grauer sent pictures of the relic, and upon investigation, Anderson and his team were able to confirm its authenticity.
"I thought, okay, here it comes, he's going to want $25,000 for me to get it back," Anderson joked. But to the contrary, when the country star asked Grauer what he would take for the special timepiece, he replied that he and his wife had always wanted to witness the Grand Ole Opry, but they'd never had the chance.
Without hesitation and, "before he changed his mind," Anderson recalled, he booked two tickets to Nashville and arranged for them to experience The Grand Ole Opry in a special way -- backstage. As Mike and his wife, Wendie, celebrated their fifth wedding anniversary, Anderson introduced them on-stage to a captive audience, wistfully telling the story of his long-lost guitar that had now found its way home.
VIDEO:
https://youtu.be/T0Q7Ngf_EeQ

Anderson said, his voice breaking, "Mike, you and Wendie just have no idea... you have no idea, what this means to me. I don't think I ever played this guitar in the Opry House because we didn't come here until 1972, but I played it many times at the Ryman. It's so special to have it back. Thank you so much. I wish you a wonderful anniversary." Laughing, he added, "It may be your anniversary, but I got the present!"
The long-lost guitar hit Anderson's hands for the first time in 50 years, and he gave its strings a strum as he held back tears of sentiment. Today, the BMI Icon Award winner and the only songwriter in the history of the country music genre to have achieved a song on the charts for seven consecutive decades, Anderson surprised the audience with a surprise appearance by co-writer and friend, Jamey Johnson, and the two performed a chill-bump inducing rendition of the now non-fictional fan-favorite hit, "The Guitar Song."
Anderson closed the special performance saying, "Thank you to Mike, Wendie and Jamey, and thank you to Billy Grammer. May you rest in peace, my friend."