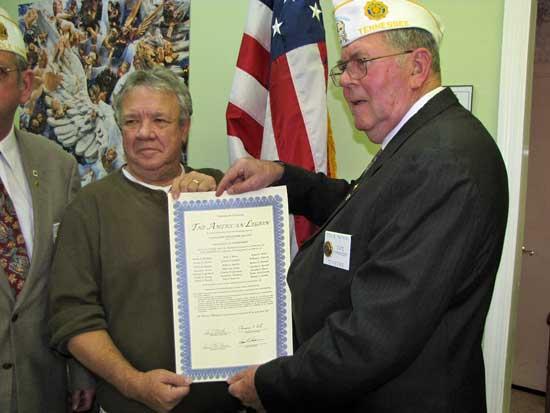 In the formation of the Post the members had agreed that #279 would carry the name of Hilton Stone, who was the long time recruiter here in Cannon County. He was also the father of Col. Jim Stone and Charley Frank Stone.

The American Legion was chartered by Congress in 1919 as a patriotic veteran’s organization. Focusing on service to veterans, service members and communities, the Legion currently has about 2.6 million members in 14,000 posts worldwide. These posts are organized into 55 departments: one each for the 50 states, the District of Columbia, Puerto Rico, France, Mexico and the Philippines.

The end of the former American Legion Post in Cannon County came about in 1965. I had never come across anything about the Legion in my research of the old Courier newspapers, or if I did nothing stood out. For reasons unknown to me the American Legion ceased to be in existence here in Cannon.

Dan Bowling of the First Stop Market approached the Veterans and Concerned Citizens for the Veterans of Cannon County to try and generate interest in forming a new Post here in Cannon County. One requirement to be a member is that you would have to have been in the military during wartime.

For today’s American Legion that includes WWII, Korea, Vietnam and the Middle East wars starting at 1990 with Dessert Storm basically for the last 20 years in which we are still invoved. These men and women are eligible to be a part of the Legion.

The men and women who signed up at the forefront are Charter Members and they are listed on the Charter that was presented Monday night. Twenty one names are on the Charter although there are more members, a closing date had to be put in action as there was a time limit to get all paperwork to the State and National Executive Members.

The Legion Members of the Hilton Stone Post #279 will be recruiting those who had served during wartime and will start building on the belief of helping others. Below is the Pre-amble to the Constitution of the American Legion.

FOR GOD AND COUNTRY WE ASSOCIATE OURSELVES TOGETHER  FOR THE FOLLOWING PURPOSES:

To uphold and defend the Constitution of the United States of America;

To maintain law and order;

To foster and perpetuate a one hundred percent Americanism;

To preserve the memories and incidents of our associations in the Great Wars;

To inculcate a sense of individual obligation to the community, state and nation;

To combat the autocracy of both the classes and the masses; To make right the master of might;

To promote peace and goodwill on earth;

To safeguard and transmit to posterity the principles of justice, freedom and democracy;

To consecrate and sanctify our comradeship by our devotion to mutual helpfulness.

The next meeting of the American Legion will be later this month and we will be able to give you information of when we meet and how to get in touch with us.

If you are eligible to serve as a member please contact us and we will get you the application to do so.