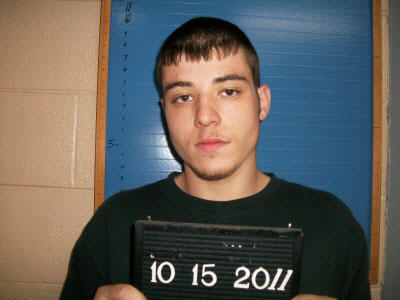 BENTON TYLER MARTIN
Hopes of hiding from law enforcement officers went down the drain for a Bradyville man recently.

Benton Tyler Martin, 2315 Geedsville Lane, Bradyville, has been charged with two counts of Theft Over $1,000 and two counts of Vandalism by the Cannon County Sheriff's Department. The charges stem from separate incidents.

Deputy Brandon Gullett charged Martin with Theft Over $1,000 on Oct. 15.

The investigation began when Deputy Seth Perry was dispatched to Iconium Church of Christ to meet with someone regarding a stolen 4-wheeler. Upon arrival he spoke with Evangeline Tidwell, who stated that her 4-wheeler had been stolen and was last seen at a residence on Iconium Road across from Odell Powell Road.

Deputy Perry and Deputy Matthew Parsley went to the location and asked the resident if they had seen the 4-wheeler and if they could look. Permission was granted to search but the 4-wheeler, a 2006 Suzuki LTR 450, yellow in color with stars and it and a blue frame and valued at $4,000, was not located.

Deputy Gullett later received information as to the whereabouts of the 4-wheeler and of a possible person of interest. He, along with Deputy Mike Smith and Woodbury Assistance Police Chief Kevin Mooneyham, went to 3357 Iconium Road in an attempt to locate the stolen 4-wheeler and Martin.

Upon arrival Deputy Gullett heard someone moving around inside the trailer there and went to the back door. Assistant Chief Mooneyham went to the front door and made contact with a female inside the trailer. The deputy entered the rear door and made contact with Asst. Chief Mooneyham in the living room. They were advised that Martin was hiding under the sink in the bathroom.

The 4-wheeler was located on the property. The owner was called to the scene and took possession. Martin was transported to the Cannon County Jail and served a warrant for Theft Over $1,000 and three others from a prior incident.

Deputy Steve McMillen charged Martin in the previous incident, which reportedly occurred on or about Aug. 28. It is alleged Martin stole a 1985 GMC truck belonging to Evelyn Witty. He purportedly drove the truck through two fences in Witty's property and then and multiple circles in a bean field owned by Russell Vance at 1910 Parker Road.