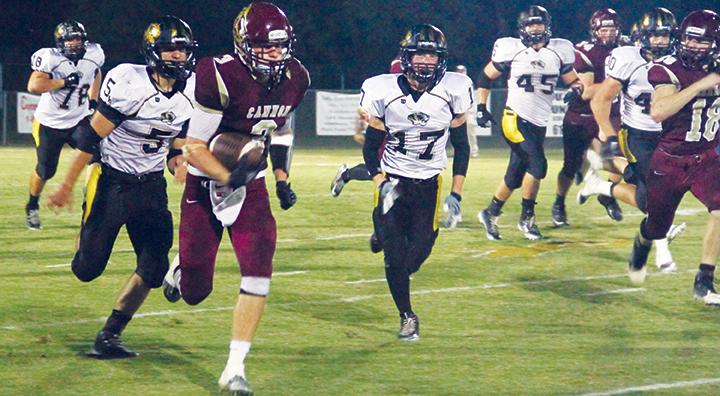 RONNY BURKS photos Cannon County senior A.J. Daniel outruns DeKalb County defenders on his way to a 76-yard touchdown run during Friday's Region 8-AA game at Schwartz Field. The play was negated due to a penalty.

TONY STINNETT
Courier Sports Editor
Any thought Cannon County had of upsetting rival DeKalb County was quickly extinguished as the Tigers jumped out to a 20-0 first-quarter lead and rolled to a 47-0 win at Schwartz Field Friday (Sept. 19).
The Lions (0-4, 0-1) lost their 24th consecutive home game and were never a factor against DeKalb County (2-3, 1-1).
DeKalb County quarterback Steven Jennings put on an air show, completing 16-of-31 passes for 315 yards and five touchdowns. He threw for 296 yards and all five touchdowns in the first half as the Tigers roared to a 40-0 halftime advantage.
Luke Boss added 64 yards and a touchdown on the ground to close the Tiger scoring in the third quarter. If not for a running clock the second half due to the mercy rule the score may have been worse.
A.J. Daniel led the Cannon County offense with 54 yards on 11 carries. He turned in one of the few highlights for Cannon County with a 76-yard touchdown run midway through the second quarter. The positive quickly turned negative when the play was nullified due to a penalty. Three plays later quarterback Jake Walkup threw the first of two interceptions.
Cannon County turned the ball over on three consecutive possessions in the second quarter to fuel the Tiger attack.
Trailing 27-0, Cannon County had moved to midfield but Walkup was intercepted at the Tigers' 37.
DeKalb's Lane Ball turned an interception into a 54-yard return for a touchdown on Cannon County's next drive. The Lions fumbled the ball away on the following possession.
The Tigers converted all three turnovers into touchdowns to take complete control by halftime.
Daniel led Cannon County defenders with four tackles and Eldon Resco added three. Resco was averaging 11 tackles per game coming into the contest.
Cannon County will be looking to get into the win column for the first time when they travel to Watertown