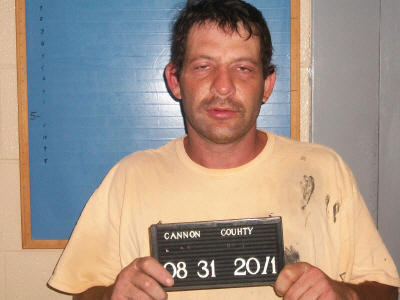 The most recent incident took place on Aug. 30 when Woodbury Police responded to the 500 block of Bryant Lane in reference to a fight in progress. Upon arrival, Woodbury Patrolman Patrick Fann found Michael Lynn Adcock, 915 Reed Court, standing on the porch of 535 Bryant Lane arguing with his nephew and sister.

When Adcock saw law enforcement pull into the parking lot, he took off running into the apartment.

Assistant Police Chief Kevin Mooneyham went to the rear of the apartment, where he observed Adcock running in the direction of Sunny Slope Road.

Adcock continued to flee after APC Mooneyham identified himself as a law enforcement officer and ordered him to stop. Following a foot chase Adcock was eventually apprehended.

He was charged with disorderly conduct, evading arrest and public intoxication. Total bond was set at $17,000. Initial court date is Sept. 27.

Adcock's first two public intoxication charges were incurred late on the evening of Aug. 25 and the early morning of Aug. 26.

On the 25th, Woodbury Patrolman John Fesmire responded to the First Stop Market following a report of a person causing a disturbance. Adcock fled prior to Patrolman Fesmire arriving at the scene, but was spotted running through a field near Sunny Slope Road. After being instructed to stop, Adcock initially ran away again, but came back and surrendered. Patrolman Fesmire noted Adcock smelled of beer and while being taken into custody Adcock stated he drank a six-pack.

About four hours later, on the 26th of August, Patrolman Brent Brock arrested Adcock on Bryant Lane where he was found in an intoxicated state. Adcock had been instructed by Sgt. John House to remain in his apartment on Reed Court following the earlier incident. Total bond from those two arrests was set at $6,000. His initial court date on those charges is also Sept. 27.