GINA LOGUE, Special to the Courier 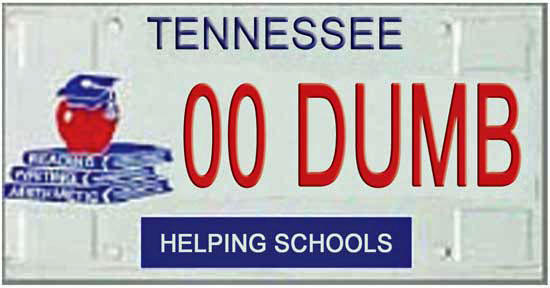 When I was in high school in the 1970s, some educational statistics were released that a state legislator found so appalling he proposed that Tennessee adopt a new license plate that read “00-DUMB,” or “double-oh-dumb.”

I don’t remember what the stats were or who released them, but I remember the political posturing.

It was at the top of every elected official’s hit parade of populist pandering topics for quite awhile.

These days, the company that administers the ACT, one of the primary keys that unlock the doors to college for millions of high school students, releases the news that Tennessee still lags behind the nation as a whole in college readiness in English, reading, math and science, and there is nary a peep.

Only 15 percent of the high school graduates tested in Tennessee in 2011 met the ACT benchmarks for college preparedness in all four categories.

Of the Tennessee high school grads, who say they want to pursue careers in health care, only 10 percent meet the college readiness benchmarks in science.

Ponder that statistic the next time your doctor sends your blood to the lab.

While we continue to fret over the dumbing down of the dumbing down, the group Tennesseans for the Arts is sponsoring a contest to design Tennessee’s next specialty license plate. Appropriately enough, it’s titled “State Your Plate.”

Entries must contain original artwork and language must be clean enough to keep your mother happy. A panel of judges will narrow the competitors down to 20. Then the public will vote.

Since we seem to be regressing collectively anyhow, perhaps it’s time we go back to the future and take our cue from Mr. “00-DUMB,” the legislator of yesteryear.

Let’s see who can design the most appropriate license plate to depict how utterly unprepared many of our young people are to face an increasingly treacherous economic environment, let alone dive into it.

Ruling out insulting and unfair ethnic, cultural and socioeconomic stereotypes, we can start with an image of a stoner zonked out on a couch after inhaling some fine weed.

Then again, there’s the perfectly bright, energetic young person glued to the computer but lost in the alternate reality of Farmville or Second Life or some hipper equivalent for hours on end.

How about a couple of gabby girls in front of the mirror more concerned with trying each other’s lipstick than with helping each other pass algebra?

Our amateur artist could draw a boy and girl at the county health department catatonically staring into space, their hearts and heads frozen with fear as they await the pregnancy test results.

Our final possibility for stupid state plate artwork takes us to night court, where a teenager is trying to hold his/her head up before the judge while trying to explain how three beers isn’t really all that many.

The images are extreme and certainly not indicative of earnest, hard-working high school students who are struggling desperately to make the grade so they can fulfill their full potential.

But news coverage of sagging scores and wrangling over curriculum, tenure and teacher-qualification issues doesn’t seem to have helped.

Seems I read last week that the entering freshmen at UT had an ACT average of 26.

Like to hear from the teachers and parents of CCHS students for their opinion of what is happening in our county educational process.

Compare CCHS and all surrounding county high school systems and you will see CCHS scores rank consistently at the bottom.

Note: This article appeared only when I logged on to HOME, I could not access when going to regular Courier website--maybe just my pc.

twinkee
[Delete]
Why is it that the K-8 schools seems to have
good scores. Smaller classes? More rules? Maybe sports are not the top priority? If you did CCHS classroom like the sports? Practice - practice until you get it right?

Not everybody can make it in the sports world. They will need to make a living. Who ends up in jail, or on welfare? People who can't cut it in the real world. Teach them right. They are OUR future.
lucydog
[Delete]
Twinkie, K-8 scores are NOT good. If you are refering to TCAP scores Cannon Co., the scores are consistantly near the bottom every year and even though the TCAP is supposed to be a snapshot of the students progress each year, our school systems studies and prepares for a least two weeks in order to get a passing score. The TCAP scores only benefit teachers and school system administators. I have stated before, try taking the TCAP scores and put them in your transcripts and see what you get!
[Delete]
That is the reason I would give up my bonus for a contract extension. Because the TCAP scores are so good.
Paul Alexander
[Delete]
Oh well. Just as long as they can bounce a ball or throw one.......
lucydog
[Delete]
This subject not important obviously , the dump subject is where the action is !
[Delete]
lucydog, the outcome of last night's commission meeting should indicate to you that many people don't have a problem with low ACT scores. If they were higher you would likely not have people saying as one did during the meeting that people who commit crimes should be hung on the courthouse lawn, and others in the audience applauding that statement.
lucydog
[Delete]
Thanks Kevin wasn't able to attend last nights meeting but was fortunate enough to have friend in attendance and after hearing some of the stories not sure if you could have added everyone in attendance ACT and and got a perfect score!