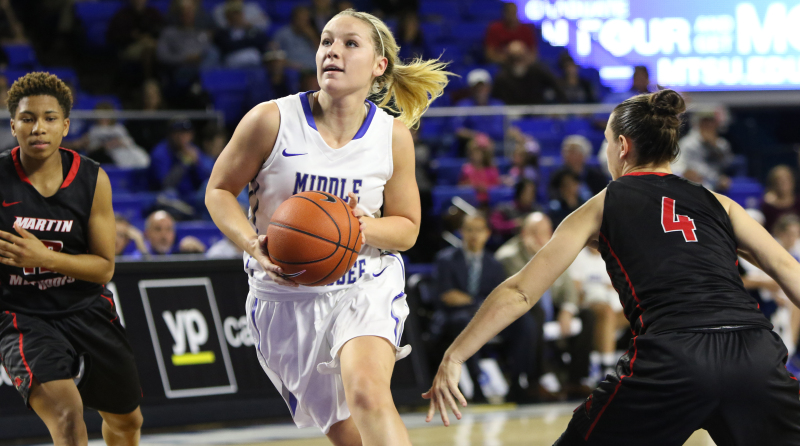 TONY STINNETT
GoBlueRaiders.com
Former Cannon County standout Abbey Sissom has played a vital role in Middle Tennessee's success at the outset of the 2015-16 season, and the sophomore standout says she is excited to be part of something special with the Lady Raiders.
Sissom and Middle Tennessee will play host to undefeated Kentucky Sunday at 2 p.m. Kentucky was ranked No. 11 in last week's Top 25 AP poll.
"It's a big game for our program and a big opportunity for this basketball team," said Middle Tennessee Head Coach Rick Insell, a Cannon County native and five-time Hall of Famer, including the Cannon County Sports Hall of Fame. "We are expecting a big crowd and we invite all of our supporters from Cannon County to be part of this. Cannon Countians will be glad to know Abbey Sissom is a big part of what our team is doing. She continues to improve.
"Abbey is stronger and now she is not only a strong outside shooter, but she is slashing to the basket, penetrating. She is a complete player. Cannon County takes pride in their basketball and they should be proud of Abbey Sissom. She is doing a great job for us."
Middle Tennessee has won three straight - all on the road - and Sissom has played a role in all of the wins.
Sissom is Middle Tennessee's third-leading scorer at 7.8 points per game and her 21 minutes per game have more than doubled from her freshman year. Sissom was a prolific scorer at Cannon County High School and finished her career second on the all-time scorer list with 2,606 points.
Sissom said putting in extra work and getting stronger in the offseason have aided her performances.
"I put in a lot of time in the weight room and in the gym putting up shots this summer," Sissom said. "I can see the hard work paying off in a lot of areas. I feel like I am rebounding better and playing better defense."
While she has been one of the team's leading scorers this season, it has been Sissom's defense that has been a strong facet of her game.
"Abbey is one of our best perimeter defenders," Insell said. "She has improved defensively and is doing a great job. We put her on Ole Miss' top scorer last week and (Sissom's) defense on her helped key our victory. Abbey is a hard worker. That is one of the many things we liked during our recruitment of Abbey Sissom."
For tickets to Sunday's game against Kentucky, call the Middle Tennessee Ticket Office at 1-888-YES-MTSU.
Read more from:
CANNON SPORTS
Tags:
Abbey Sissom
Share: