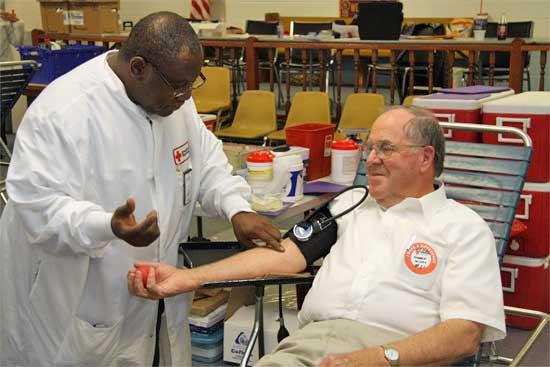 Howard Witty, right, gets ready to donate blood for the 160th time Thursday.
Thursday marked a monumental occasion in the life of Woodbury Resident Howard Witty. The 78-year-old reached the 20-gallon mark in blood donations during the American Red Cross Blood Drive at the Woodbury Lions Club.

Twitty has donated blood 160 times during his life, most of those donations coming during the last 26 years.

"I've been climbing up the ladder (in number of donations) pretty good over the last few years," Witty said. "But I'm glad to do it because donating blood is important. People's lives depend on it."

A gallon contains eight pints of blood. A pint is the most a person can give during each drive.