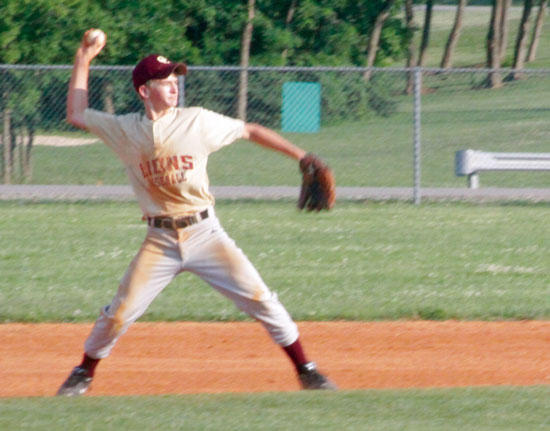 The tournament begins this week with games slated for Wednesday and Thursday to set up Friday’s championship at the Barfield Complex.

The Lions are 9-0 in league action. They started the week with a resounding 14-0 win against the Braves.

Nathan McGuire was 3-for-3 with a single, double and triple. Bailey Hale added two hits. Every Lion had at least one hit.

In an anticipated matchup of the league’s top two teams, Nathan McGuire controlled the opposing lineup with five innings of two-hit baseball as the Lions stormed to a 9-1 win. The one run scored against McGuire was unearned.

The Lions were behind 1-0 after the top of the first but took the lead for good in the bottom of the frame. Jared Judkins led off the winning with a hit and scored on Graden Strang’s single. Strang came around to score on McGuire’s hit.

The Lions added one in the second, two in the third and broke it open with four in the fifth.

Tucker Francis was 2-for-3 and Strang reached all three times. Jackson Mason was 1-for-1 with two walks and two runs scored.

Tucker Francis was 3-for-3 and Graden Strang was 2-for-3 as the Lions put on a strong hitting exhibition and never looked back against the Marlins.