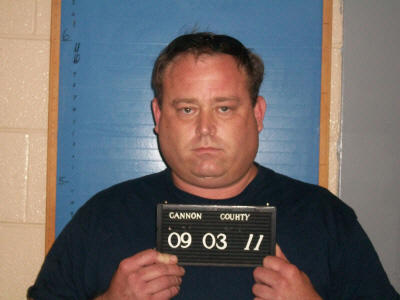 JASON TENPENNY
A man stopped while pulling a horse trailer suspected as being stolen in Rutherford County wound up being charged with drug, theft and weapons charges on Sept. 3.

Cannon County Sheriff's Deputy Eric Moss was patrolling Short Mountain Road at around 5:40 p.m. on that date when he observed a red Chevrolet truck pulling a horse trailer. The trailer matched the description of one that had been reported as stolen in Rutherford County.

Deputy Moss contacted Deputy Brandon Gullett and they preceded to attempt to make contact with the truck. The truck pulled into the parking lot of Short Mountain Market.

The driver, Jason Todd Tenpenny, 864 Doolittle Rd., Woodbury, stepped out of the vehicle and was informed that the trailer he was pulling fit the description of a stolen trailer. Tenpenny stated the trailer belonged to him.

The deputies were unable to locate a vehicle identification number. Deputy Moss asked Tenpenny if he had a title or bill of sale and he said he did not.

Tenpenny stated he could make a phone call and produce some sort of proof the trailer belonged to him and nervously began fidgeting with his cell phone, but never appeared to talk to anyone.

Deputy Moss informed Tenpenny once again that he and Deputy Gullett were trying to make sure the trailer was not in fact stolen and Tenpenny again said it belonged to him. He stated he bought it from someone, but was unable to say who he had purchased it from.

Tenpenny said he had sanded and painted the trailer because it had a lot of rust on it. He also said the trailer was empty when he bought it.

Deputy Moss noted Tenpenny appeared to be nervous due to the fact he could not be still, his speech was broken, he was sweating profusely and his hands were shaking.

Deputy Moss asked Tenpenny if he had any narcotics on his person or in the truck or trailer and he stated he did not.

Deputy Moss asked Tenpenny if he had any objection to a search of the vehicle and he at first said he did not, but then stated he did object. The deputy informed Tenpenny he was going to run his K-9 officer around the vehicle and did so. The K-9 alerted to the odor of narcotics on the driver and passenger doors of the truck and the door of the tack room on the trailer.

While Sheriff Young searched the truck, Deputy Moss began searching the trailer. He found a backpack on top of the mattress in the horse trailer that contained a red bag. Inside the bag was approximately 30 grams of marijuana, coffee filters containing a white powdery substance, a glass pipe, digital scales, multiple clear plastic bags and several straws that had a white powdery substance on them.

Tenpenny gave Deputy Gullett a knife and a pair of brass knuckles he had in his pocket.

Deputy Smith found a Smith and Wesson 10mm pistol underneath the mattress in the horse trailer. A check showed the weapon had been reported stolen in White County.

At that point Tenpenny was placed under arrest for being in possession of stolen property and narcotics. Sheriff Young drove the truck and trailer to the sheriff's department.

While being booked, Tenpenny took his boots off and a silver canister fell out of one of them. It contained a clear bag containing a white powdery substance which tested positive for methamphetamine.

Tenpenny was read his Miranda rights. Deputies Gullett and Moss asked him about the narcotics and he stated they belonged to him. When asked how often he used methamphetamine, Tenpenny stated he had quit but admitted to using it that day. Tenpenny denied cooking methamphetamine. He also asserted again that he had bought the trailer, but could not say from whom. Tenpenny then said he did not want to say anything else without speaking to his attorney and he was returned to booking.

Investigator Anthony Young also obtained a search warrant for Tenpenny's residence. During that time the owner of the trailer arrived at the sheriff's department and identified it as well as some of the property inside as belonging to him.

A search of Tenpenny's residence uncovered a marijuana plant in the front yard that had approximately one pound of marijuana on it. Near the back door was found a trash bag containing two one pot meth labs, an HCL generator, cold packs, three empty boxes of pseudoephedrine along with empty blister packs, coffee filters containing a white powdery substance and receipts showing when and where the items had been purchased.

Also located near the back door was a John Deere riding mower which had been stripped of all VIN numbers.

A search of the interior of the residence revealed a clear plastic bag, identical to the bag Tenpenny had in his boot, containing a white powdery substance, approximately 33 grams of processed marijuana and a set of silverware that match a description given in a previous theft case. Also located inside was a saddle, valued at $3,000, and tack that belonged to the owner of the horse trailer. Some of the tack had the victim's name on it.

All items were seized and transported to the sheriff's department. Tenpenny was subsequently charged with two more counts of theft over $1,000, maintaining a dwelling for the purpose of keeping or selling a controlled substance (two counts), manufacture of methamphetamine and manufacture of marijuana.

Print
Members Opinions:
TnTnTn
[Delete]
That was excellent police work by Deputy Eric Moss spotting the stolen horse trailer which led to discovery of all the other criminal acts. TTT
Cin
[Delete]
It certainly was. Now let's hope his work wasn't for nothing and this guy goes to prison instead of just getting probation. Have you noticed the line of probationers standing outside the probation office every Wednesday?
punkin01
[Delete]
Oh most of the time they just get a slap on the hand & they get probation @ Cin,your right that line is a mile long,they need to start sending them to the Pen.

SaddleUporShutUp
[Delete]
To bad it was HER that identified HER tack and trailer. But Kuddos to the Sheriff's department for all their hard work. Without them I would still be missing all my stuff! I can promise to if I can do anything to keep him in there longer I will because nobody should have to go through having their stuff stolen!