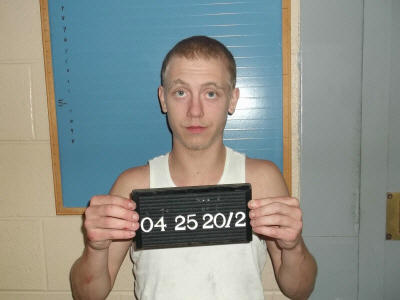 CHASE M. HEATH
Officers were forced to use pepper spray to subdue a young Woodbury man following his arrest on April 25.

Chase Heath, 18, of 311 Terrace Lane, was charged with Public Intoxication, Simple Possession and Vandalism on that date by Woodbury Patrolman Chris Brown.

According to the officer's incident report, Heath was so intoxicated that after being told over five times what he was being charged with he still did not understand and asked why he was (at the Cannon County Jail).

"He was not cooperative with the officers or the (judicial) commissioner once he was taken into the jail and had to be sprayed with pepper spray multiple times by officers at the jail to be calmed down," Officer Brown stated in the report.

The incident began when Officer Brown was dispatched to the "D" building at South Ridge Apartments for a report of a fight in progress. Upon arrival Officer Brown learned the fight had occurred at the "B" building. When he went there the two subjects were gone.

A witness told Officer Brown that one of the combatants, Heath, had left on foot and the other, Michael Ray Thurmond, had left in his car and both had gone down Sunny Slope Rd. toward W. Adams St.

At this point Heath came out from the "A" building and was asked by Officer Brown to come to his patrol car. Heath said Thurmond "went off" on him and told him to leave (Thurmond's apartment) and that's what he did.

Then Thurmond returned to the apartment complex. He said Heath had come over for a visit. Thurmond said an argument started over alcohol. Heath refused to state what the argument was about. At this point Heath walked away from the apartments, heading towards W. Adams. Officer Brown asked other officers to pick him up.

Thurmond stated Heath got angry when he told him to leave his apartment. He said Heath left and went toward the old Busy Kids building and returned with a large rock. Thurmond said Heath threw the rock through the rear passenger side window of his car and left the scene. A witness confirmed Thurmond's account of the incident.

Officer Brown observed "a lot of glass in the parking lot" as well as in the rear seat and floorboard of Thurmond's car. The rock used in the incident was in the back seat of the vehicle.

Patrolman John Fesmire stopped Heath while we was walking down Sunny Slope Rd. During a search Officer Fesmire found a piece of aluminum foil in Heath's pocket containing a small amount of marijuana.

While speaking with Heath, Officer Brown noticed a strong odor of alcohol about his person. Heath said he had one beer earlier and that it was OK for him to drink at (soon to be) 19 years of age if his parents allowed it. He was asked by Patrolman John House to blow into a portable breathalyzer and failed the test.

Heath had a total bond set of $1,500. Thurmond was charged with Driving While License Suspended and had a bond of $500 set. Initial court date for both is June 12.