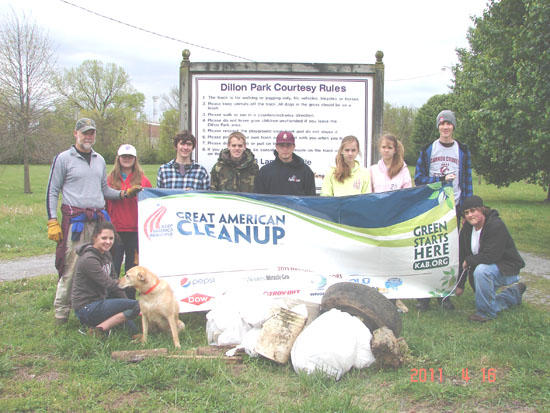 CCHS Outdoor Club members who participated in the cleanup were, standing L-R, Marc Larson, Emory Larson, Dillon McMurray, TJ Paul, Brock Francis, Sarah and Katie Hickman (West Side) and Damien Coomes and kneeling, L-R, Whitney Alexander and Justin Prater
Keep America Beautiful’s Great American Cleanup, the nation’s largest community improvement program, takes place annually from March 1 through May 31, involving an estimated 3 million volunteers and attendees. This year in Cannon County, the "Outdoor Club" at CCHS held a cleanup day at Dillon Park on April 16, 2011. Approximately 200 pounds of household trash was picked up along the river bank. There were also larger items picked up such as a lawn mower motor, plastic buckets, an old tire and other misc. items. On April 20th Girl Scout Troop #331 and #236 cleaned up our local ball park. Approximately 50 pounds of litter was picked up. This event is organized by the County Executive’s Office. If you or your organization is interested in participating in the 2012 GAC, please contact Diane Hickman at 615-563-2320.