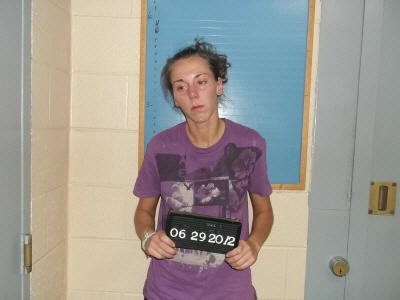 Officer Fesmire, while on patrol shortly after midnight, was two cars behind Tate’s 2009 black Nissan Altima on West Adams St. and was headed east. He noticed the car came extremely close to leaving the road on the right hand side. It turned onto Lehman St. and Officer Fesmire followed. When they reached the three-way stop at College St., the vehicle crossed over into the oncoming traffic. He followed and stopped it on Lester St.

Officer Fesmire told the occupant, Tate, why he had stopped her. After running her license and logging it into his patrol computer, her asked her to exit the vehicle.

Officer Fesmire had Tate performed a series of field sobriety tests. In his assessment, she was unable to perform them satisfactorily. Tate stated she had “a beverage” about three hours prior to being stopped and that she takes Xanas, Paxil and Klonopin.

Officer John House, who had arrived on scene, took a breath sample from Tate on a portable breath tester. It registered .11.

Tate was placed under arrest. She did not answer in the affirmative when asked to submit to a blood test.

Officer House performed a search of Tate’s vehicle and found bottles of medication (as described above), a “beer can” with a hidden compartment and two bags of marijuana inside, a marijuana grinder, filters, two pipes, a baggie of a substance which tested positive for methamphetamine, and a partially consumed bottle of vodka.